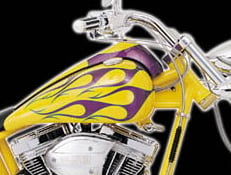 Editor’s note: we are very pleased to present another article by guest expert John Wyckoff. He explains the trends that powersports dealers and other retailers can expect to see in 2005 in each of the major segments. The powersports market includes motorcycles, watercraft, ATVs, scooters, pocketbikes and utility vehicles.

Harley-Davidson has dominated the V-Twin market for decades. The custom manufacturers have entered the field with high-quality, reliable, eye catching bikes, albeit at high prices, ranging from about $30,000 to over $100,000. The two big makers of such bikes, Big Dog Motorcycles and American IronHorse, are sold out for just about all of 2005. I expect to see this market continue to grow.

This market has been trending downward for some time. The cause? Mostly caused by the way users abused the environment, thereby triggering adverse legislation. I expect to see some stability as the warm weather approaches. It will take more aggressive dealer input to convince customers to obey both the laws and the social obligations to allow others to enjoy the water too.

The “echo” generation (children of the Baby Boomer generation) appears to love scooters. Once they were made and sold primarily in Europe. The narrow roads and limited parking there made scooters practical. In the U.S. scooters have been selling in college towns and high-density urban areas. Now the Japanese companies have raised the bar by producing large displacement (up to 650cc) scooters that can cruise at well over the Interstate speed limit all day. They made these units capable of carrying a large quantity of “stuff” in well-designed storage areas.

Once again the Feds are getting anxious. The news reports of children getting hurt or killed is the first wave indicating that there will be hearings followed by legislation. Once again the dealers who sell these units must do more to educate their buyers. If the Feds keep up the pressure I expect to see this market flatten out after having grown dramatically for the past decade.

“Mine’s faster than yours.” “Mine can take corners better than yours.” These are the buying paradigms of the young, testosterone-driven wannabe racers. The manufacturers have complied. Of the 40 fastest production vehicles in the world, 38 are motorcycles. Insurance companies are well aware of this and are setting the premiums accordingly. These over 1,000cc bikes will continue to sell but I don’t see any growth in this market, only a shift in market share based on who has the fastest for that particular period of time.

The dirt bike products are better than ever. More power, better handling, better suspension, superior brakes. The problem? Land closures. That means fewer places to ride. While private land is still available in many parts of the country, events like the enduro, which require miles of terrain, are becoming less available. The other problems are noise and restricted trail use.The European makers continue to produce “race ready” off-road bikes. The Japanese and now the Chinese supply most of the units purchased by the hobby or casual rider.What will the future hold for this segment? I expect a small decline over the next few years.

The race to see who can produce the largest displacement engine is about over. The rider has come to the conclusion that size does matter but that size and associated weight matter in a negative way. Fuel injection, electronic gadgets, cushy adjustable ride have been available for several years. Older riders who are in no hurry to get anywhere ride these bikes.The biggest displacement bikes will continue to be relatively steady while the smaller displacement (600cc to 750cc) will gain in sales. They are just as fast and easier to handle in heavy traffic.

It seems little manufacturer attention to this segment has been a factor in the rather uninspiring offerings in this market. While popular in other parts of the world, the American market seems to prefer performance or touring bikes. The better performing scooters may be encroaching on this segment too. I don’t expect to see much in the way of movement in this small segment.

This segment of bikes ranging from 250cc up to 1,000cc continues to grow. The bikes either favor road or off-road, depending on the manufacturer’s focus. They don’t excel in either category. However, the riders have a tendency to be more casual and not as strongly competitive. The western United States with hundreds of miles of dirt roads are ideal territory for dual sport bike riders. Expect continued small increases in sales of this niche.

This niche has great potential. Professional racers, RV owners and children alike seek it. The price range is as wide as the appeal. Although some are sold outside the usual powersports dealerships those inside the industry have a better chance of survival. These bikes are prone to being abused meaning they require more service. Big boxes and auto parts outlets are ill-equipped to handle after the sale service.

These 4-wheel, side-by-side seating vehicles are in demand by farmers, ranchers, hunters and other enthusiasts. Demand continues to outstrip supply. Yamaha’s Rhino has raised the bar with their offering. Kawasaki, John Deer, Polaris and others are beginning to hone in on the demand for creature comforts and performance demanded by the buyers. I expect this market to continue to grow as the supply of product grows.

The year 2005 and 2006 should show continued but small growth overall. The exchange rate, which favors American exports, is an inhibitor. The prices of all imported niche bikes can be expected to increase beyond the inflation rate. That’s just my opinion. But as Dennis Miller says: “I could be wrong.”

John Wyckoff is a true guru of the motorcycle industry. A sought-after speaker at motorcycle events and frequent contributor to the motorcycle press, he is the founder of Intersport Fashions West. He is an expert on the motorcycle business and dealerships and is known for having his finger on the pulse of the motorcycling public. He is the author of Mind Your Own Business, 2nd Edition: The Complete Guide to Profitable Powersports Dealerships.

How Harley Davidson Lost its “Cool”

John Wyckoff (now deceased) is the author of Mind Your Own Business, 2nd Edition: The Complete Guide to Profitable Powersports Dealerships. He founded Intersports Fashion West, a wildly successful powersports leather accessories business which he sold to Hein Gericke. In later life he appeared as a frequent speaker and consulted with motorcycle dealership owners on profitability and retailing.