Small Business Optimism Up — And Also Down

Inc.com reports that optimism is up among U.S. small business owners.

On the same day the Los Angeles Times reports that confidence is down among U.S. small business owners.

So what’s going on? Is one study right and the other wrong?

Welcome to the world of small business studies.

The Inc.com report covers the National Federal of Independent Business (NFIB) small business optimism survey. Generally the NFIB survey is highly regarded. The U.S. Small Business Administration’s Office of Advocacy even incorporates the NFIB optimism survey in its Quarterly Economic Trends report. That’s one reason I place a great deal of confidence in the NFIB survey. 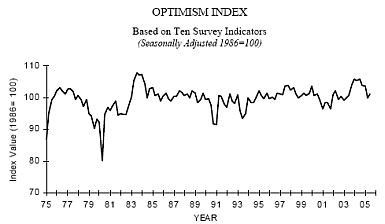 The Los Angeles Times cites a survey conducted by the Gallup organization on behalf of Wells Fargo. A big difference with the Gallup/Wells Fargo study, however, is that the full study is not made public. Typically most of us see only the press release and media articles written about the study. Without seeing the questions that were asked or more data it is hard to comment on the study.

When I started following these small business studies closely a few years ago, I immediately noticed the differences among studies. And it’s not just differences between different studies. Even the NFIB survey moves up and down from month to month, as the chart shows.

The small business market is hotter than the Space Shuttle entering the Earth’s atmosphere. Studies about small business are proliferating — everybody’s doing them. With that many studies, variances are to be expected.

However, even though the numbers may vary from survey to survey, or month to month, when you consider the big picture, often the differences between studies are not too significant. Bottom line: I wouldn’t pay undue attention to differences between two surveys. Instead, look for trends over a longer period of time.