A Refreshing Book about Business Failure 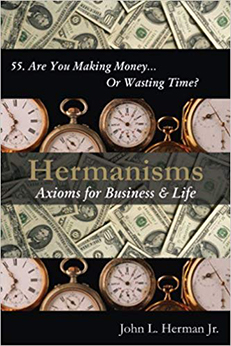 A few weeks ago I got a book in the mail called Hermanisms: Axioms for Business & Life.  It’s a quick easy read about business failure.  If you do not want to become a negative statistic, you will want to read this book.

A Shocking Statistic About Failure in Business

I get lots of books in the mail — far more than I have time to read, much less review.  But this book caught my eye because of its tough love approach to succeeding in business.

The book starts out with the author, John L. Herman, talking from personal experience about business failure. He discusses how some of his own businesses failed.  He also discusses how one of his companies was a brokerage firm that represented failing businesses going through bankruptcy. His firm managed to sell over 300 of those money-losing businesses.

He says he was involved in over 1,000 failed businesses in some capacity. And for that reason, he is as qualified as anyone (and more than some) to talk about business failure.  I’d have to agree!

The honesty appealed to me. That’s what kept me reading. Before I knew it, I had read half the book. Another evening later, I finished the entire book. So it’s easy and fast to read.

And it’s refreshing to hear blunt assessments of what it takes to succeed.  No sugar coating here.

For example, Herman asserts a shocking statistic. He says most of the time, businesses simply do not make money.  The author claims that 60% of businesses never make a profit.

Just think about that for a moment.  Fewer than half of all businesses are profitable.

That means, the odds are not in favor of entrepreneurs.  Yet we keep starting new businesses, some of us repeatedly. The failure statistics do not dissuade us.

The book contains 77 “Hermanisms” or lessons in short chapters.  The are practical, from-the-trenches tips, not academic studies.

His first axiom says that if owners calculated the time it would take them to succeed, most would never try. But, he says, as entrepreneurs even the occasional failure doesn’t stop us from salivating at another chance. “As Americans, we are wired to believe we will always win,” he writes.  The thought of failure never enters the mind of a true entrepreneur. He or she gets up, dusts off, and tries again.

Sounds pretty motivational doesn’t it?  Yet it’s not one of those feel-good books about positive thinking and pumping up your enthusiasm (although it does that).  The book is actually much more about the nuts and bolts of what it takes to succeed.

Here’s a short excerpt from one business failure lesson I’ve learned the hard way myself:

Hermanism #21: Know math or no money.

If you do not understand the number details of what you are trying to do, you probably won’t enjoy a big payday. Regardless of what field you’re in. *** You have to be willing to study the numbers. Know the numbers. And know what buttons to push to change the numbers if you want any money left over at the end of the month.

If the book sounds like a downer, trust me, it is not!

Despite pointing out how frequently businesses fail and the myriad reasons for it, this is a highly motivating book.  Because it’s really about equipping you to be successful.

And it’s also about self-actualization.  One of the book’s goals, according to the author, is to “make you understand that playing the game gives you more than just money. There are other ‘profits’ to be derived from being your own boss. While your company may not make you rich or last a lifetime, it will enhance your being — if you let it.”

If you are looking for tough love with the truth about business failure, this is a great book.  And if you want to walk away feeling inspired and motivated, in a contrarian kind of way, this is also the book you want to read.