Being the Boss is Overrated 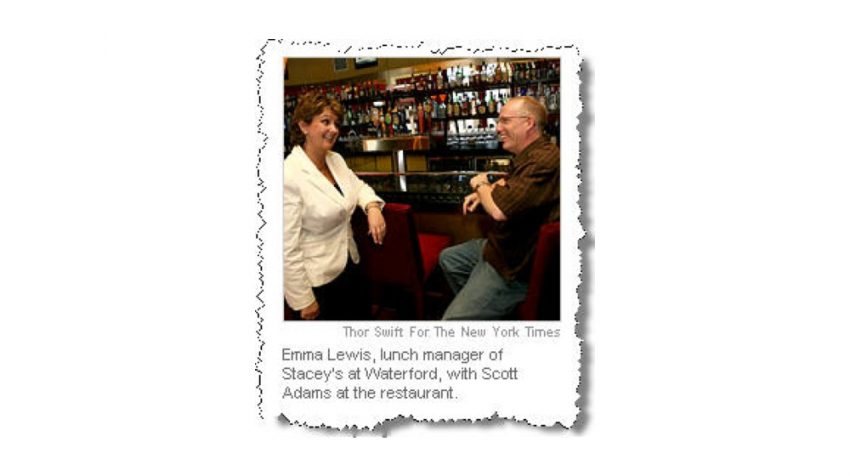 Remember the Peter Principle, about people rising to their level of incompetence? There’s also the Dilbert principle:

“The most ineffective workers are systematically moved to the place where they can do the least damage: management.” – Scott Adams

This comes up recently with news coverage of Dilbert creator Scott Adams managing a restaurant. The New York Times story called it The Tables Turn for Dilbert’s Creator. Apparently he’s a better cartoonist than a manager.

“I’ve been in this business 23 years, and I’ve seen a lot of things. He truly has no idea what he’s doing,” said Nathan Gillespie, the new, wise-cracking head chef, after discussing a recent dust-up with Mr. Adams over the grilled salmon filet.

Emma Lewis, the lunch manager, describes Mr. Adams as someone who should be shielded from tough decisions the way a crawling infant needs to be protected from household hazards. “We laugh and say we’re not going to let him watch the Food Channel,” she said. “He’ll think he can run a restaurant.”

And the man behind Dilbert does in fact get good reviews from employees for empathy and humanity and being generally a good guy:

In interviews authorized by their generously self-deprecating boss, employees describe him as trusting and appreciative, [although] full of off-the-wall ideas about how to turn around the business, and dramatically clueless about the harsh realities of the restaurant industry.

On the other hand, employees also say he knows his limitations and combines deep trust in them with an instinctive ability to motivate people.

In the meantime, though, the business he’s running isn’t doing so well:

While the chains have 30-minute waits for tables on weeknights, Stacey’s at Waterford has more jewel-tone microfiber chairs than diners, and is slowly but steadily losing money.

I think there’s more than irony here. There’s also a lesson about how things work in small business, possibly in all business.

Being the boss is overrated.