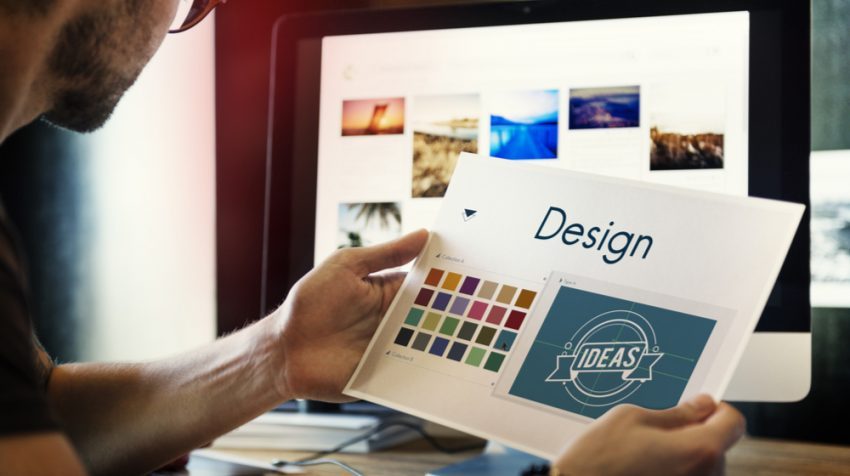 Editor’s Note: This is Part 2 in a 3-part series about designing a new logo for a website I own called Selling to Small Businesses. In Part One I outlined how I went to the Logoworks.com by HP site and commissioned a new logo. I received eight preliminary design concepts. From those eight I narrowed the field to 3 logo designs that I thought had potential. Then I asked for feedback from readers — YOU!

Of the three preliminary design concepts that I wrote about in Part One of this series, Composition number 1 seemed to get the most favorable response from the most readers (thank you all so much!). It was also my own personal favorite. So I decided to narrow my choice down to focus solely on Composition number 1:

However, as your feedback suggested, Composition number 1 is not quite ready for prime time. It still needs some work.

So the next step in the process is to give the Logoworks designers some input about my chosen Composition, and ask them to make revisions.

I closely considered each of the comments that readers like you left following my first article asking for feedback. Among the points, I summarized these:

The Process of Requesting Logo Revisions

Requesting revisions to the preliminary logo design turned out to be pretty easy. I logged in to the control panel for my account at Logoworks. I clicked the button to choose Composition 1. At that point, I was given two choices: accept the logo as final, or request additional revisions to Composition 1. Naturally I clicked “request revisions.”

I was expecting to get a single text box that asked for my feedback. What I got was more detailed than that — and actually very helpful. I was taken to a screen called a “Revision Brief” and presented with a series of very specific questions. Among the questions were:

But the best question was the one where I was asked to estimate how close to completion the logo was — from 0% to 100%. That question is a good way to convey the magnitude of the changes you are expecting. I chose 50% completion. Using the reader feedback I collected from you all, I filled in my answers.

After completing the Revision Brief, I confirmed my requested revisions and hit the submit button. I immediately saw a confirmation screen that instructed me to check back in 3 business days. A revised design would be ready then.

Bringing out the Best in Me

What I liked about the Logoworks process during the revision stage, just as in the initial stage, is the way I was prompted to be specific. In a nice but firm way the system guided me through the process by asking probing questions, but without overwhelming me.

I particularly liked being able to request additional revisions, and not being forced into a “take it or leave it” decision. I felt like an integral part of the process of designing the logo — my input was being sought.

So this concludes the second stage of the process. And at this point I am awaiting the revisions to be incorporated into the logo design, which I will then review with you in Part Three of this series.

Looking forward to seeing what the Logoworks designers come up with!