What Was Your Defining Moment in Your Business? 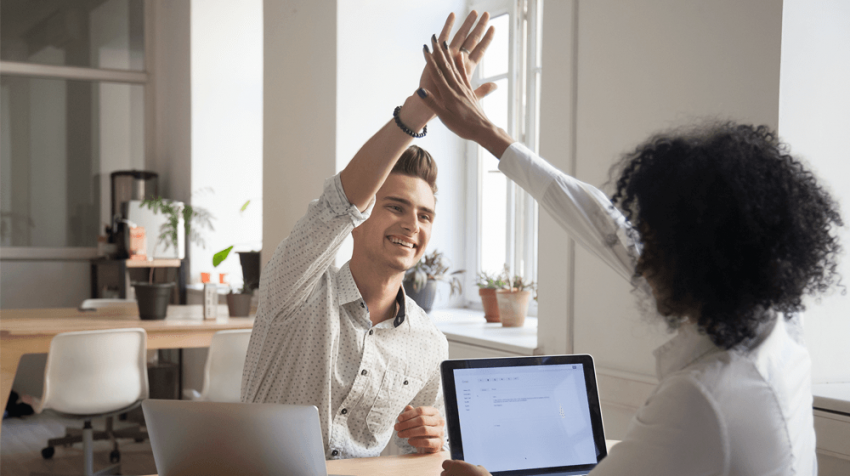 How would you answer this question:

Did you ever reach a defining moment in your business when you just knew it was going to be a success?

You may be thinking: “I can’t answer that because my business is not where I want it to be — yet.”

But — this question is really about the exact moment that something just clicked.  It’s about when you became certain, in your heart, that someday your business would make it.

You may not have reached your desired success yet. But now at least you can take a few breaths. Some event or revelation made it clear that your business would not be closing up shop next week or next month (barring catastrophes).  You knew it would survive and thrive.

“When I paid myself a $600 paycheck,” says Anita Campbell, Small Business Trends:

For me, the defining moment came when I finally could start paying myself a regular paycheck. At the time, I started paying myself $600 a month.

To some of you that may not sound like much.  “Years of experience so you could get to $600 a month,” I can hear some of you … aghast!  (Actually, I think that was my husband I could hear 🙂 But the amount was beside the point … it was a temporary level … a stepping stone to the future.

Yet, it was a symbolic leap.  You see, at first, I paid myself NOTHING. Zero. Nada.  Every single dime had to be plowed back into the business.

But the moment I looked at my accounting records and realized I could pay myself and not go in the red, I just knew.  I felt like I could whip the world. It empowered me.  I could take on bigger challenges. No $600 check was ever so sweet — nor so meaningful — as that first regular paycheck from the business.

“When they started contacting ME,” says Andru Edwards of GearLive:

When thinking about that one, first defining moment in Gear Live’s history, I have one specific moment that I can point to where I knew things were going to be successful. For a bit of a background, Gear Live was started as a hobby where I would publish my thoughts and opinions about technology. In order to get exclusive pieces out there, I had to approach manufacturers about reviewing their products. To make money, I needed to sign up for some bottom-of-the-barrel advertising networks, along with Google Adsense, just to get by.

I knew that I wanted to take the site full-time, but in order to do so, I needed it to be better recognized in the industry and needed it to earn more money to support myself and my family. After months of phone calls and emails going out, trying to get advertisers and manufacturers on board (while also trying to build readership,) two things happened in the same month.

First, I had a manufacturer contact me, rather than me having to contact them. They wanted to know if we wanted to take a look at one of their new products, and if so, they would send me a review unit loaner. That meant that we were finally getting recognized by the companies that we had been writing about and that they were taking the first step to contact us since they felt that we were important enough to be included in their press strategy.

The other thing that happened, almost simultaneously, was that we had advertisers starting to contact us as well. Rather than scraping by on Adsense on low-paying banner ads (relationships that I had to go out and start), large advertisers saw value in connecting with our audience.

One those two things happened, I knew right then, that Gear Live was going to be a success. At that point, I could focus completely on making great content.

I’ve been part of a few businesses and I seem to gravitate towards underdogs and strategies which need to outsmart as opposed to outspend … The defining moments of success all seem to have one constant: at some point, the fear of failure is replaced by panic to get all the work done.

Looking back, as soon as the worries of not “making it” went away there were always periods of heads down craziness – time flew by, the best work happened – you’re too busy to think about anything else. I think those are the best times.

About a year ago, Trend Hunter hit a million views in a month, which was a pretty large psychological number. Achieving that level as a part time hobby, I knew that I could really transform the business when I started full time. Today we’ve grown to over 5 million monthly views, so I suppose it’s working out. The problem with that question, for me, is that my definition of success is always changing. So every time we hit a big goal, I don’t really feel successful, I feel motivated to hit the next goal.

Success can be an elusive goal for small business, especially in as dynamic a business as web publishing. Today, I feel like my blog is on top of the world, but what about tomorrow when blogs are passé?

It wasn’t the car, though, that killed the industry. Rather it was the buggy whip maker’s definition of success. They might have been the best at braiding leather whips, but by the mid century that was as quaint as claiming that your business is the most experienced Windows 95 developer today.

Because they saw themselves as whip makers, instead of in the transportation after-market accessory business, there was nowhere for the buggy whip makers to go but into bankruptcy.

My startup, Technologizer, is only a few weeks old, and so to declare it a success already would be premature. I’m still very much in the process of getting it off to a good start. So far, the vital signs are excellent.

When you hatch plans for any new company, your business plan begins as nothing more than words on a piece of paper. Chances are that you’ll deal with at least an unbeliever or two who thinks your plan is unrealistic — I sure did. I was confident, though, that my goals for Technologizer were attainable, and it’s been a joy to see things I hoped to accomplish come true, one by one.

There hasn’t been one defining moment so far, but there have been little successes almost every day. For a media site like Technologizer, goal one is to create content that lots of people find compelling. And so every time I publish a story that resonates with my audience, I feel better about my chances of success.

“None … until we sign acquisition papers,” says Jacob Mullins, VentureBeat.com

At our stage of the game we’re still working tremendously hard to ensure that we are a success. I don’t think there’s been a formative moment for any entrepreneur, until he signs the acquisition papers, that the company is going to be a success. There are so many things that go into creating a successful company, the idea, the people, the timing, the business model, and a little bit of luck. You just have to keep working hard, keep an eye on the competition, use the good ideas, learn from the bad ones, and stay focused on creating the best quality product out there.

So now you’ve heard from 7 of us. Please leave a comment below with YOUR answer to this question:

Did you ever reach a defining moment in your business when you just knew it was going to be a success?