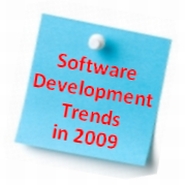 Like President Barack Obama said, it’s about getting up and dusting ourselves off. He also mentioned risk taking, and doers, and creativity.

In software publishing, as much as anywhere, the web continues to change the business landscape. Retail markets go down in a double-whammy of technology trends plus macroeconomic factors, users look to leave it all online instead of install it from a CD, the rich get less rich and the newbies keep growing. Brave new world.

Here are my guesses for the top 10 trends in software publishing in 2009.

As I read through these 10 guesses, I notice how really mixed the picture actually is. It would be hard to generalize about how things are in the software world. Some of these segments are bursting out of the seams with opportunity. Others feel like old businesses, getting older by the minute. At least we know it’s going to be interesting.

About the Author: Tim Berry is president and founder of Palo Alto Software, founder of bplans.com, and co-founder of Borland International. He is also the author of books and software on business planning including Business Plan Pro and The Plan-as-You-Go Business Plan; and a Stanford MBA. His blog is Planning Startups Stories.  He tweets as Timberry.

Tim Berry is Founder and Chairman of Palo Alto Software, Founder of Bplans, Co-Founder of Borland International, Stanford MBA, and co-founder of Have Presence. He is the author of several books and thousands of articles on business planning, small business, social media and startup business.
17 Reactions
Subscribe
Follow @smallbiztrends
RSS LinkedIn Pinterest iTunes