When Business Goes South on You 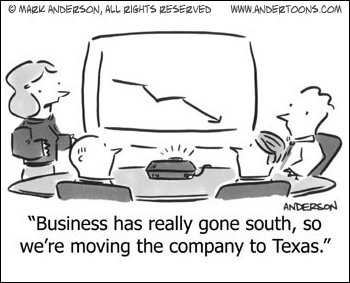 I wish life were more like Mystery Science Theater 3000.

Remember that show? It’s the one where three smart alecks watch a bad movie and make fun of it. I’ve watched a lot of it, and often I’ve wished I could talk back to life’s soundtrack without bystanders thinking I was crazy.

This cartoon came during a meeting (as they often did) when we in sales were being lambasted. Amid the motivational idioms and cliches was “sales have really gone south lately.” Immediately I wanted to say “somewhere down in Texas we think.”

My bank account was glad I refrained, and I squirreled the idea away for later.