R.I.P.: The Death of the Small Community Bank

Despite the title of this article, community banks are not going to croak and die out altogether tomorrow.

However, the U.S. banking industry has been consolidating for the past 15 years. The big gobble up the small.  As a result, banks keep getting bigger. It’s harder to find small banks.

This could mean it gets harder for small businesses to get loans in the future.  And at the very least, the face of small-business banking will change — in part, for the better and in part, for the worse.

According to research by Celent, smaller banks are on their way to becoming an endangered species. Between 1992 and 2008 the number of U.S. commercial banks under $100 Million in assets dramatically shrank, with the number dropping by 5,410 (from over 8,000 to under 3,000 banks in that size range). 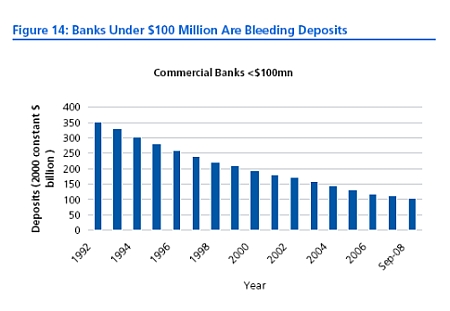 Large banks are able to drive operational efficiencies due to economies of scale. The report notes: “Running a bank requires a certain amount of scale, and that floor is rising due to increasing regulatory requirements, channel support, and product support.”  Thus, there’s a lot of pressure for banks to consolidate and get bigger, so that they can get more efficient and profitable.  In other words, they may not be able to afford to stay small.

So what does this have to do with small businesses? Well, it means that as smaller banks go away, small businesses, particularly in rural areas without a lot of competing banks, may have a tougher time in the future getting loans.

I’ve long contended that the main advantage of a community bank over a larger bank is if you need a loan. By developing a personal relationship with the local lending officer in a small community bank, as a business owner you may have a better shot at getting a business loan on favorable terms, especially in borderline situations.

But larger banks can be good news for small businesses, too.  If you’re looking for the most sophisticated banking products; advanced online banking and bill pay technology; extended branch networks/ hours — larger banks usually walk all over the smaller banks.  The wider range of banking products and the convenience of online banking and longer hours — typically provided by larger banks — is a positive development for small businesses.

For your small business, you have to decide what you want most. Do you go for a larger bank that gives you the kind of sophisticated services and banking products that can help make your business more productive,  efficient and profitable? Or do you go for a smaller bank where you can get access to the decision-makers, and forge a relationship that may come in handy for a business loan?

Meanwhile, the Federal government is paying healthy banks to take on weaker banks under the financial system bailout from 2008.  For instance, if you look at this list of banks getting TARP money, you’ll notice many are not even in trouble.  Some have already made “arranged marriages,” such as PNC which quickly acquired National City Bank with some of the TARP money.  That means this consolidation trend will not only continue, but probably increase — and small and midsize banks may disappear faster than ever before.

Anita Campbell is the Founder, CEO and Publisher of Small Business Trends and has been following trends in small businesses since 2003. She is the owner of BizSugar, a social media site for small businesses.
26 Reactions
Subscribe
Follow @smallbiztrends
RSS LinkedIn Pinterest iTunes