Is the Job Loss Among Entrepreneurs Reversing Itself?

Elsewhere I have written that the job loss has been worse for entrepreneurs than for others since the recession began. That’s true, but, in the past couple of months, the job situation has appeared to improve among entrepreneurs.

From July through September 2008, entrepreneurs were disappearing at a fairly fast rate. The seasonally adjusted self employment rate for people working outside of agriculture fell 0.4 percent in that period. However, since October, the situation has improved. The non-agricultural self-employment rate stayed the same in November, improved in December, and declined only slightly in January (see the table below).

The Seasonally Adjusted Non-agricultural Self-Employment Rate by month from June 2008 through January 2009. 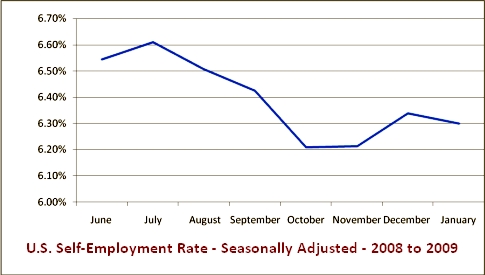 The catch is that the “improvement” in the job situation among entrepreneurs appears to be a relative one. The better self-employment rates we have seen in recent months are largely the result of a cessation in declines in the number of self-employed people, coupled with continued declines in overall employment.

About the Author: Scott Shane is A. Malachi Mixon III, Professor of Entrepreneurial Studies at Case Western Reserve University. He is the author of nine books, including Fool’s Gold: The Truth Behind Angel Investing in America; Illusions of Entrepreneurship: The Costly Myths that Entrepreneurs, Investors, and Policy Makers Live By; Finding Fertile Ground: Identifying Extraordinary Opportunities for New Ventures; Technology Strategy for Managers and Entrepreneurs; and From Ice Cream to the Internet: Using Franchising to Drive the Growth and Profits of Your Company. I discuss the topic of this post in more detail in my book Fool’s Gold: The Truth Behind Angel Investing in America .