Puh-lease, No Bailout for the VC Industry 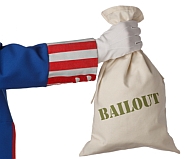 Two weeks ago, while talking with a friend who has a venture-backed business that is having trouble getting another round of funding, he jokingly suggested “maybe the government will bail out the VCs.”

Little did I know that others are apparently thinking this way — and that we’d start seeing trial balloons floated for bailing out venture capitalists.

Bailing out venture capitalists is a dumb idea.

That’s all we need — our hard-earned money as small business owners and taxpayers going to subsidize the investment returns of venture capitalists.  Because in the end, we have to remember that VCs are in it for an investment return.

Fortunately, one of the smartest VCs around, Fred Wilson, says “No thanks” to public money.  Basically, what he says is that only losers will want public money:

“So Tom’s idea, while it looks good on paper, is a dream. The top venture firms don’t want, don’t need, and are never going to take government money. The same is true of the top entrepreneurs.

The worst firms, on the other hand, will gladly accept government money. And that is what is going to happen with all of these government efforts to pour more money into the “innovation sector”. That money will go to bad investors and weak entrepreneurs and management teams for the most part. It’s a problem of adverse selection. ”

But Rex Hammock makes the best point, by offering:

” … a note of reality to the perception that “investing in innovation” is what venture capitalists do. They’re in the business of generating a high rate of return on money they invest. *** But I’m not writing here to blast VCs, but to correct the notion that companies backed by VCs are the ones that create jobs and grow the economy and solve society’s problems. ***

Here’s the reality: The job creation, innovation and economic engine of America are not the companies that are funded by the top 20 venture funds, but the 99.999% of businesses who are run by people who could never get inside the door of one of the top 20 venture firms until long after they didn’t need money from them.”

And let’s definitely not confuse venture-backed companies with America’s unsung heroes: the small businesses owners who: