Small Businesses Will Lead Us to a Better Future

Polling firm Zogby International conducted a joint interactive poll with WeMedia, asking the question: “Who will lead us to a better future?” 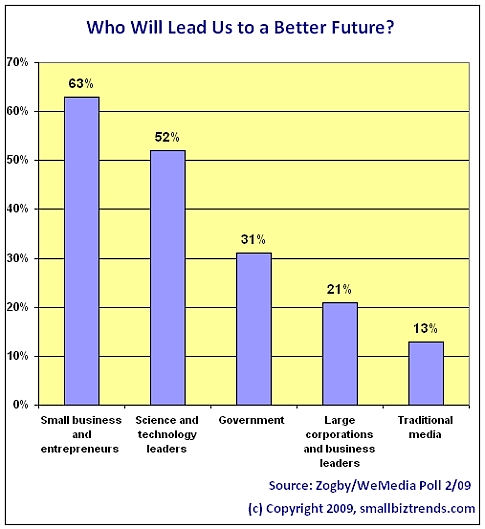 Government, which should be leading, came in at 31%. Large corporations and business leaders came in next at 21%. Traditional news media such as newspapers, television, radio, and magazines bringing up the rear with just 13% having faith in them to lead the way.

A couple of observations on this:

(1) Small businesses are definitely going through a time of “high popularity”. But Andrew Nachison, CEO of the media think tank iFOCOS, sees this as part of a fundamental cultural change. He points out that dissatisfaction with government, big business and the media runs deep. That, he says, is leading individuals to take charge: “If big business, government or the media won’t lead, we’ll lead ourselves. We’ll create our own businesses and our own media to build a better future. No matter where you sit or what you do, that’s a call to action to participate, to inspire hope and bring prosperity to more people. It’s an agenda for everyone: Lead us to a better future.”

(2) Is anybody surprised by the traditional media falling to the bottom? To some degree it’s a matter of being in a beleaguered industry (print media) struggling to make money — it’s hard to see a future for newspapers and magazines that are declaring bankruptcy and laying off journalists right and left. But there’s something deeper, too. The polarization in favor of one political side or the other has undermined the public’s confidence in the mainstream media. Instead of being political activists, maybe, just maybe, a return to factual reporting would restore some confidence in the media.

Your thoughts? Why do you suppose the numbers came out as they did?

(Hat tip to Martin Lindeskog for this survey.)

Anita Campbell is the Founder, CEO and Publisher of Small Business Trends and has been following trends in small businesses since 2003. She is the owner of BizSugar, a social media site for small businesses.
37 Reactions
Subscribe
Follow @smallbiztrends
RSS LinkedIn Pinterest iTunes