Earlier this week I got my new HP 2140 Mini computer.  It’s one of those new “netbook” computers, so called because they are small and compact, and designed in large part for surfing the ‘Net and using cloud applications — although they are capable of much more.

This is a brand new model that HP just started to ship.  I mentioned on Twitter that I’d just bought one.  A number people asked about it, so I took some pictures during the grand “unboxing.”  I thought I’d share the pictures, along with my initial observations.

First, some background: this is a small portable computer.  I wanted a netbook because I travel on business about 18 times a year. Since I run Web-based businesses, I can’t afford to be away from my computer for long.  Leaving the computer in the office and taking a small handheld device like a BlackBerry on the road is simply not a realistic substitute in my line of work.

My existing laptop is perfectly good, but it weighs nearly 7 pounds.  Lugging it around is becoming tiresome.  Besides, with airlines now charging checked baggage fees, I am finding that in-cabin storage space is tighter than ever.  I needed something smaller than a traditional laptop, but bigger than a smartphone device.

So the first thing I noticed was the amazingly small box that the HP 2140 came in.  When it arrived, my husband asked if I’d ordered new shoes — the box looked small enough to be a shoe box! 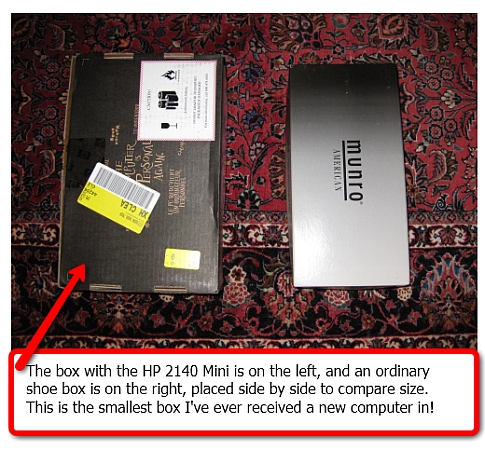 Right about now you’re wondering “when the heck is she going to quit taking pictures of boxes and show us the computer.” … OK, I’m finally there.

I unwrap the 2140 and admire the beautiful brushed aluminum case. But I couldn’t put the boxes away just yet — one last comparison — notice how thin this netbook computer is: 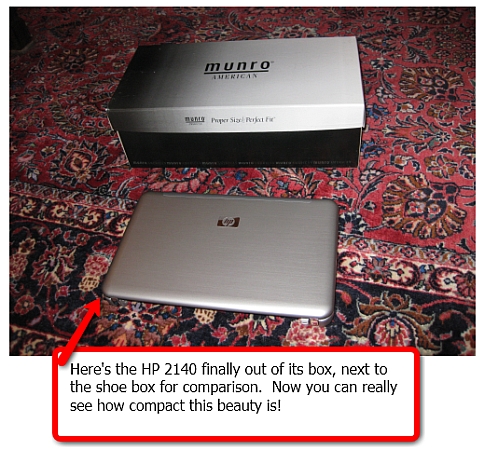 Another thing that surprised me, is how uncomplicated it was to get this new HP 2140 Mini ready to boot up.  I am used to receiving computers boxed in enough excess wrapping to choke a landfill, lengthy instructions I am too excited to read, and one or two little gizmos I don’t recognize and invariably neglect to hook up in the right order or never hook up because I have no idea what they are.  This, however, was simple and not wasteful: 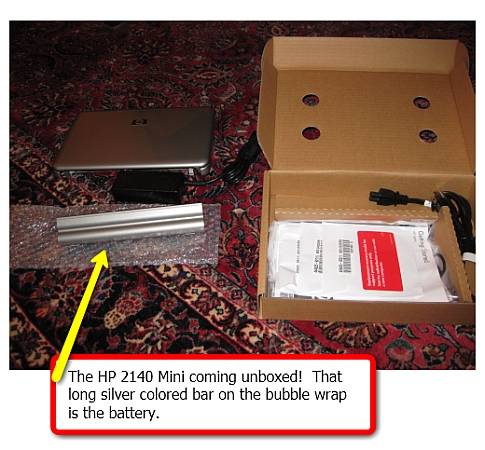 I’m not sure if you can tell, but the battery in the above shot is actually thicker than the netbook computer itself (which is only around 1 inch thick).  What that means is that the battery makes the back of the PC sit up higher and angles the keyboard nicely.  The battery becomes an integral part of the design — obviously the engineers thought that through carefully.  It’s an indication of the attention to design detail on everything about this compact PC.

You do not get a lot of complex paperwork. There’s a simple “Getting Started” Manual consisting of 16 pages (which is nothing for a manual), some backup disks and warranty info.

OK, enough with the boxes and wrapping already, Anita!  Let’s get to the good stuff! 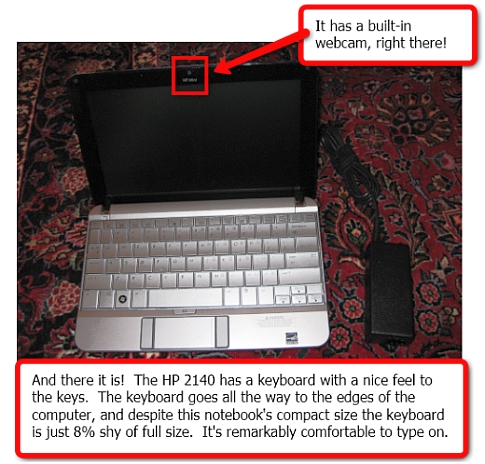 This little baby has 160 Gigabytes of storage — 40 more Gigs than my current desktop computer that I use everyday.  It has an Intel Atom processor — all I know is that’s considered pretty good for a small netbook.  Plus it has 1 Gigabyte of RAM, which is plenty considering that I won’t load many software applications on it, other than anti-virus software, Microsoft Office Small Business, Irfanview to manipulate images, Skype and AIM.  That’s about all I ever use on the road — the rest are Web-based apps that I access through a browser.

Below you see the 2140 Mini next to my old laptop computer. Notice the size difference compared with a regular laptop.  And it is so much lighter, too!  It’s 2.6 pounds.

Here I had to angle the screen downward so that it wouldn’t reflect the camera flash, so the screen may appear a little smaller than it really is due to the angle: 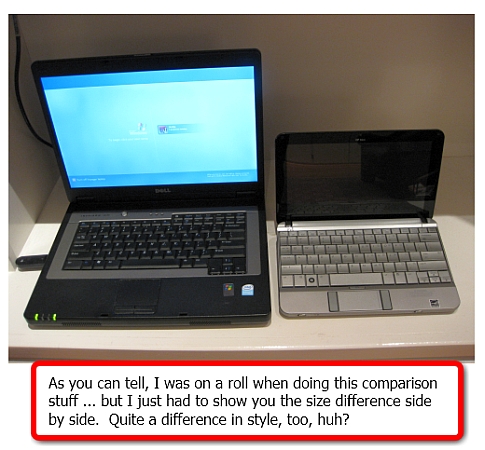 Keyboards are one of the first things to go on me because I do so much typing.  This keyboard has DuraKeys, meaning the keys have a coating that prevents the lettering from wearing off.  Also, the individual keys are actually wider than the keys on my other keyboards, with a crisp snap-back when you press them.

It makes typing (especially fast typing, as I do) much easier.  Another nice feature:  the keyboard is almost as wide as my laptop’s full size keyboard, as you can see in this comparison shot:

The HP 2140 Mini is about the size of a largish business book.  Don’t believe me?  Here it is next to Tim Berry’s “Plan as You Go Business Plan” book. 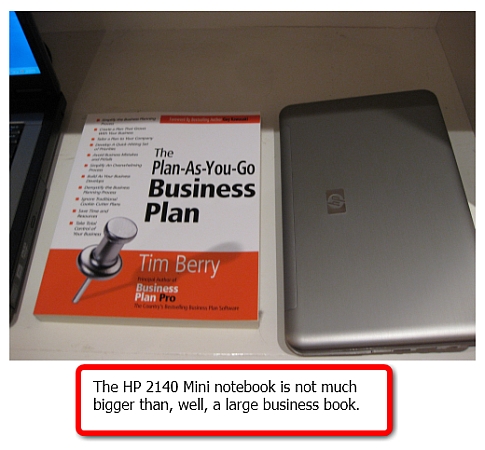 When traveling by airplane, these days I carry a tote bag to take the place of a purse and briefcase.  My existing laptop was always a tight fit for the tote. I could barely squeeze it in because it’s so wide — and after I did I couldn’t fit much else.  Add my external mouse (something I always use), cords and associated stuff, and about all I had room left over for was my wallet, iPod Touch and mobile phone.

If I tried to stuff in a Daniel Silva thriller to read on the plane, a small folding umbrella, water bottle or anything else, it ended up weighing a ton … and I looked like a bag lady with stuff sticking out every which way.  My shoulder ended up killing me, too!

I will not have that problem any more.  Here is a shot of the new HP 2140 Mini ready to slip into my travel bag — as you can see, there will be plenty of room: 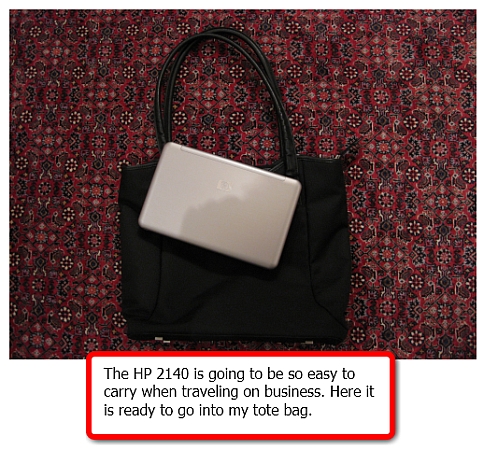 And how do I like the 2140?  I love it!  It boots up fast.  It comes with a Flash video tour that shows you the computer’s features — very helpful.  It came preloaded with a trial subscription of McAfee Total Protection Internet security/ antivirus software, and a trial of Microsoft Office 2007.   Plus, the case not only looks great, but because it’s aluminum I expect it to stand up to the rigors of travel.

What did it cost?  The HP 2140 Mini cost me just $529 (USD).  That’s with the upgraded battery with 8 hours’ life, which added $30.  I purchased mine directly through HP’s online store.  But you can check your favorite computer retailer — and shop around.  It looks like even at the HP store the prices are a little lower now than 3 weeks ago when I ordered mine (January 24, 2009).  Compare HP 2140 model configurations here.

At a later date, I intend to write a full review of the HP 2140 Mini notebook computer, including showing you its operating features.  For now, all I wanted to do was to have you follow along with me during the unboxing phase, and give you my initial impressions.  For the use I intend to make of the HP 2140 Mini (for business travel), I am very happy with it.

Anita Campbell is the Founder, CEO and Publisher of Small Business Trends and has been following trends in small businesses since 2003. She is the owner of BizSugar, a social media site for small businesses.
18 Reactions
Leave a Reply Cancel reply
Subscribe
Follow @smallbiztrends
RSS LinkedIn Pinterest iTunes