Entrepreneurial Pessimism or Worse News Coming on the Job Front?

Recently, I took a look National Federation of Independent Business (NFIB) data small business hiring to see what was going on with entrepreneurs’ hiring plans.

In its monthly survey of its members, the NFIB gathers two important statistics on this question: “job openings,” which measures the percent of companies with positions that they are currently unable to fill, and “hiring plans,” which measures the proportion of businesses that plan to increase hiring over the next three months minus the percentage that plan to decrease hiring over that period.

In the figure below, I have charted the trends in the two numbers. 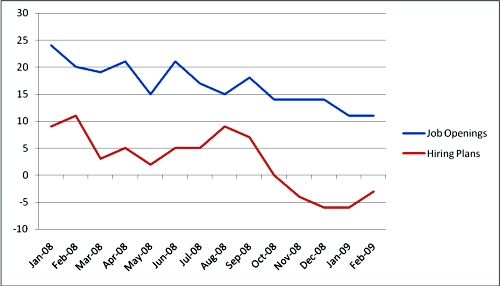 Both numbers are much lower now than at the beginning of 2008. (No surprise there.) But, from September 2008 through January 2009, future hiring plans fell much faster than current job openings.

Either way, the slight uptick in hiring plans in February 2009 suggests a ray of hope. Maybe things are starting to improve.