When Focus Groups Are Not, Well, Focused 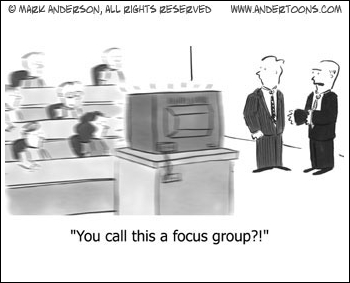 Sometimes you find inspiration that’s been right under your nose for years.

I don’t use filters a lot in Photoshop, but occasionally I like to play with them.  I was toying with an image and tried some blur effects on it.  It was really fun visually, so I challenged myself to write a cartoon about something blurry.

The joke came pretty quickly, but it took a while to get the right level of blurriness where you could understand the scene and still be bothered by the effect.

I was pleased with the end result and have since gone back to the filters menu for occasional inspiration.  You just never know where your next idea is waiting.