Small Business Optimism is Down, but Sharp Upturn Expected

It shows that conditions and sentiment are not a pretty sight among small businesses.

Although there have been some tiny signals — albeit weak signals — from other sources suggesting things may be looking up in the economy, you wouldn’t know it from looking at the NFIB report.  First of all, there’s this chart: 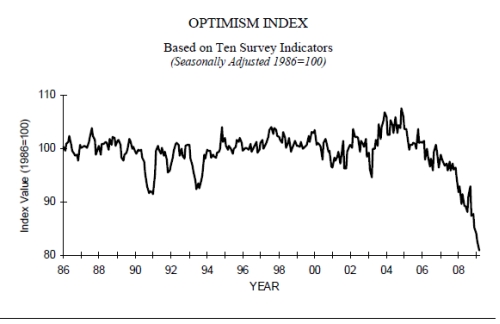 Pathetic looking, isn’t it?  You don’t even have to know what the numbers stand for to know that’s a bad chart — the steep downward line speaks for itself.

Essentially, this chart is saying that the Small Business Optimism Index of the NFIB is near an all-time low — actually the second lowest reading in the 35 year history of the NFIB survey.  Only during the 1980-1982 recession was the index lower.

And how do they feel? Not so hot.

Employment among small business firms is down. profits are down, capital spending is down — well just about any number you look at is down.

But there is a silver lining, according to William Dunkelberg, the chief economist of the NFIB.  He says that such a sharp downturn as we are in now, is leading to pent-up demand for spending.  That means we are likely to have a sharp upturn once the economy starts recovering, as he writes (emphasis added):

“Small business owners are clearly cutting costs at a very rapid pace (as are larger firms as well),  which primarily involves reducing employment. Cost cutting is likely being over-done since there is uncertainty about the future, in particular when the recession will end, and earnings are in the tank. What this portends, however, is a rapid improvement in employment and earnings once the economy establishes a forward momentum. Sharp recoveries are possible only after sharp declines. Capital spending and inventory investment are at or near record low levels and, more importantly, have remained their longer than during any recession in the 35 year NFIB survey history. This is feeding an ever enlarging pool of “pent-up demand”.  Consumers are accumulating a similar pool of unfilled spending needs as well. Car sales will not continue all year at the 9 million rate recorded at the start of 2009. More will be bought, not a return to 16 million, but a gain. Normally, well over a million new homes, apartments and condos are needed each year, but new construction is a third of that. More houses will be built. This will be the start of the private sector rescue of the economy. Some fiscal stimulus will start to filter in, but it will, as always, be late to the party. The “stimulus package” and the political urgency surrounding it was a smoke screen for other agendas.”

So there you have it from the NFIB Small Business Economic Trends report for April 2009 (PDF): not a pretty picture now, but once things start to recover — things could go up up up.

I agree with the assessment about a sharp recovery.  We’ve been affected by the non-stop media coverage about the economy and crises and bailouts — beating into our heads how bad things are — making a bad situation seem much worse.  Naturally people stopped spending, out of fear.  When you don’t spend in a consumer economy like ours, it becomes a self-fulfilling prophecy as demand drops. Then sales drop, then employment drops, and everything slows or declines like dominoes falling.

It’s time to shake off this climate of fear and get on with the economic recovery.

What do you think? Is this Index an indication of how you feel?  Or do you feel more optimistic?