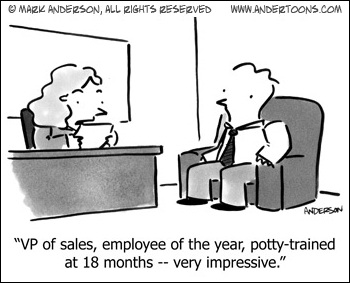 In a recent interview I was asked if I got a lot of material from my children. As I told the interviewer, I tend to compartmentalize cartooning and being a dad. Each requires pretty much my full concentration, so there’s very little overlap, but the above cartoon is a rare exception.

My wife and I were weathering a rough patch potty training my son and we were devouring every book, article, and old wives’ tale on the subject. I found a lot of material on training children very young and the benefits thereof.

Being a worrier, I began to wonder if I’d started too late. Soon all sorts of late-start horrors began to stew in my head, and it wasn’t long before the cartoon part of my brain began to look for over-the-top scenarios on the flip side. What might he have accomplished if we’d started much earlier? Had I robbed him of some great destiny?!

It all worked out, of course, and this cartoon was an unexpected bonus.