Is the jury still out in your mind as to whether social media matters in business? If so, a recent survey might make you change your mind. In fact, it may cause you to re-think your entire marketing outreach, especially if you market to women.

The study found that 42 million women in the United States (roughly 53% of the 79 million adult women in the United States who use the Internet) participate in social media at least weekly. As they spend more time with social media, women are spending correspondingly less time with traditional media: 39% less on newspapers, 36% less time reading magazines, and 30% less time watching TV.

That’s according to a recent social media survey by BlogHer, the women’s blog network, along with iVillage and Compass Partners.

Of course, the flight from traditional media to social media has been reported before and may not be startlingly new to you. But this particular survey digs much deeper. There are 3 interesting findings that I would like to point out, that are worth spending time considering:

More women use social networks like Facebook and MySpace than anything else, with blogs their second choice. Forums and discussion boards come next, with Twitter bringing up the rear (remember that the next time you’re tempted to think Twitter is THE be all and end all of your marketing). Here’s a slide (slide 8 ) from the research study that shows usage: 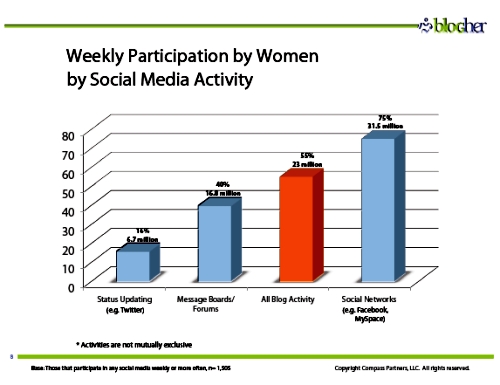 If you were looking solely at raw numbers, you’d conclude the most important place your brand needs to be seen is over at Facebook or MySpace, right? Well … not necessarily.

It’s not just about how much time is spent in an activity, it’s what women do in that activity and how much that activity plays into their purchasing habits. This slide (slide 10) from the survey shows the difference between reach and influence. 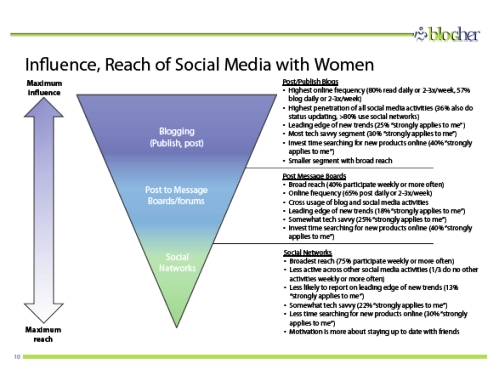 The women who post to blogs are the most actively engaged. They spend the most time online. Over 80% also participate in social networks like Facebook, and over one third of bloggers also participate in Twitter. But more to the point, those who blog are more likely to be tech savvy, on the leading edge of trends, and invest time searching for new products online. Those who participate in social networking sites like Facebook are motivated to spend time there more as a matter of staying in touch with family and friends.

The slide below (slide 20) tells the tale of the difference in type of advice and information sought, and how the different types of social media come into play. Women are more likely to go to social networks for beauty, entertainment and dating advice. But for the majority of other categories they look to blogs. 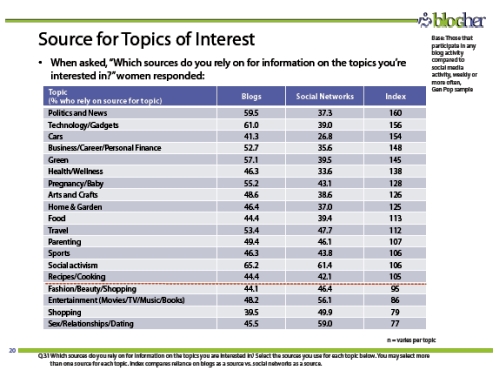 Depending on the nature of your business, it might be worth it to focus on Facebook or MySpace — if, for instance, you are in the entertainment business. But for most things, such as if you are in a B2B business or selling technology, blogs could give you more influence.

Read the entire survey, which you can download here (PDF), along with the press release. It was released at the end of April 2009, and surveyed 2,821 women in the general U.S. population, 1,008 women from the BlogHer network, and 788 women in the iVillage network.

This is definitely one survey worth checking out, as the insights dig deep beneath the surface.

Anita Campbell is the Founder, CEO and Publisher of Small Business Trends and has been following trends in small businesses since 2003. She is the owner of BizSugar, a social media site for small businesses.
67 Reactions
Subscribe
Follow @smallbiztrends
RSS LinkedIn Pinterest iTunes