During times like these I start watching the NFIB’s Small Business Optimism lndex like a hawk. Why?  Because it is such a good indicator of how small businesses feel towards the economy.  And change is in the wind in the economy, so we’re all looking for signs.

The NFIB (National Federation of Independent Business) has for decades conducted a monthly survey of small business owner optimism.  I’ve found it to be pretty close to what’s going on in the economy among small businesses.  Politicians and pundits may spin things, but not small-biz owners in this survey.

And this month the Small Business Optimism Index shot up by almost 6 points, to its highest level so far in 2009. 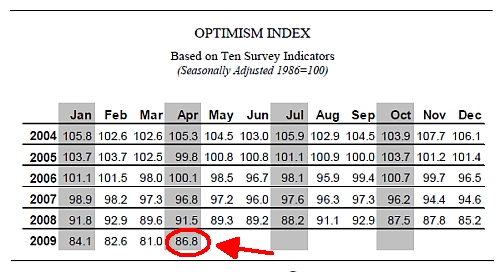 Before you pass out from excitement over a couple of numbers on a chart, keep in mind two points:

(1) The Optimism Index and associated economic indicators are still pretty low historically.  We’ve got a long way to go before anyone will do high fives about the economy.

(2) It is still too early to tell if this is a sustained trend, or just a temporary blip.  However, based on other economic indicators, I am optimistic we’ll see a bigger improvement next month.  But who knows?  With the economy it’s easier to “see” by looking backwards, than it is to predict the future.

Meanwhile, William C. Dunkelberg, Chief Economist for the NFIB, once again this month points out the silver lining in the economic black clouds.  He writes compellingly that when we do get to the economic turn around, there will be a lot of pent up demand  — a very good thing for future sales:

‘Overall, “pent up demand” is building rapidly in the economy. Capital spending and inventory investment are at record low levels as are plans to increase spending. The reduction in employment is unprecedented in survey history and likely overdone. Prices have been cut to reduce inventory, but cut to unsustainably low levels. Car sales, usually around 15 million annually cannot stay at 9 million. New housing units are being constructed at a third the rate normally needed. Population growth and household formation continue apace and all the new households are not all going to live in Florida and California where excess house supply is huge.

Trillions of dollars sit on the sidelines in money market funds earning virtually nothing. The “dykes” are starting to leak, a flood is a significant upside risk. In the long run, consumers spend a fairly steady share of their income. The rapid growth in paper wealth and easy credit allowed them to get ahead of themselves, but they are starting to even things out and this will support gains in spending as the economy recovers.

The uncertainty now lies with government policies. Just how much of a headwind will new regulations, “nationalization,” higher taxes, spending that diverts private resources to public use and a stunning level of borrowing that could crowd out private investment pose for the economy? Can the Federal Reserve reclaim the liquidity it has created before inflation sets in? Time and politics will tell.’

Check out the Small Business Economic Trends report for May 2009.