Infusionsoft, a Gilbert, Arizona company which provides automatic follow-up software to automate online marketing functions has changed its business model, eliminating its up-front set-up fees that it previously charged new customers.  The set-up fees ranged from $2,000 to $6,000.  The company also will offer a 15-day free trial of its product, something it hasn’t done before. 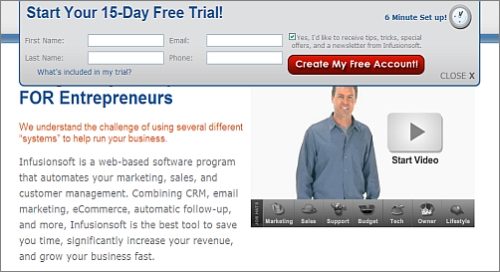 They’ve also unveiled a new website (an easy-to-read white site to replace the black site they had before) that makes setting up an account fully self-serve.  The website refers to a “6 minute set-up” — much faster than their previous set-up which could have taken days and involved faxing in existing marketing information that needed to be manually input by Infusionsoft or outside contractors it hired.

This announcement is a major shift in the company’s product.  Not only does it make their product more affordable and less risky for small businesses to try, but it also puts the customer more in control.  As a customer you can set up an account 24/7, on your terms, and don’t have to wait on anyone to input data for you.

According to Dave Lee, VP of Marketing, the company had to re-engineer and re-design the product to make it more self-serve.  It now features an online wizard that guides the customer through the setup process, along with a progress bar to show you how much of the setup you’ve completed.  The software is also more intelligent, with simplified data import options.  It recognizes data formats from major applications such as Salesforce.com, Act and Excel spreadsheets and automatically sets data up in the proper fields.

The new approach is the result of two years of software development work — they also had to change their own internal business processes, too.  To fund the redesign and re-engineering, in December 2008 Infusionsoft raised $7.9 million in venture capital funding — a real feat in an otherwise investment-unfriendly climate. Its investors are Mohr Davidow Ventures and vSpring Capital.

The Infusionsoft system helps small businesses stay in touch with customers and prospects to convert interest into sales and repeat sales.

The company has a bigger footprint in the small business market than I’d realized, with over 14,000 small business customers today. It has big growth plans, and now with new customers able to go online and set up their own accounts without a large investment up front, the company is positioned to accelerate its own growth.

However, changes in business models aren’t without risk.  According to Dave Lee, the company is expecting lower revenues in the short term due to elimination of the setup fees.  On the other hand, the company’s growth potential in the mid- to longer term is much larger now.  (Sometimes you have to be prepared to take a short term hit to grow in the long run.)

Infusionsoft has been my radio show sponsor for the past year and a half, and it’s been intriguing to watch their approach to marketing.  They have done some particularly creative things (such as their “double your sales” guarantee).  But then, that’s what the best small businesses do best — be creative.