What it Takes to Compete With Top Blogs: 3 to 10 Posts a Day

According to the newly-released Technorati State of the Blogosphere 2009 Report, the top 5,000 blogs have one thing in common:  they publish frequent posts.

If you have visions of turning a blog into an ad-supported business, you’ll need to know what you’re up against.  And what you’re up against is blogs that resemble media publications more than they resemble hobbyist sites.  For one thing, those high-authority blogs average roughly 3 to 10 posts a day, according to this chart: 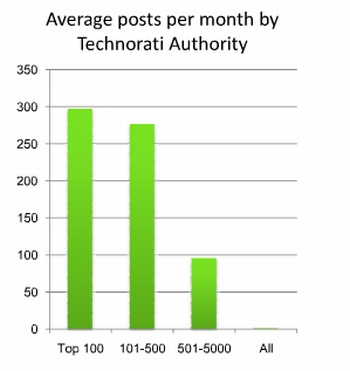 The State of the Blogosphere is being released in installments, but a presentation overview of the results is available on DocStoc.  There are a couple of interviews of well-known blog personages accompanying the report with interesting insights too.

For instance, Michael Arrington, founder of TechCrunch, noted in an interview that TechCrunch bloggers write 3 posts a day:

RJ: I’ve noticed in my own personal experience with you, and I’ve also heard this from a blogger that knows you very well, that nobody works as hard as you do and the reason I’m raising that is because one of the things that we learned in the 2008 State of the Blogosphere was the highest authority blogs posted the most frequently. The top 100 averaged 12 posts a day.

MA: Yes, I think this goes back to the Gizmodo and Engadget theories of posting. We hired John Biggs who was the founding editor of Gizmodo and he’s been working with us running Crunchgear. The first thing he said is posting matters more than anything, and if you look at Cruchgear he runs that blog a lot differently from TechCrunch: very much shorter posts and tons and tons of them, and it’s quick hits and a lot of it is re-blogging major media and it works and we get a lot of page views – it’s great it’s a profitable blog, it’s awesome. I love his team and I read it, but that isn’t TechCrunch’s style. I know that lots of posts lead to lots of pages, but I don’t think it necessarily leads to more credibility…

RJ: That goes back to the quality that you started with you: to be a good writer and write quality stuff.

MA: We have a good team here and I look for them to write three to four posts a day, and three is fine and I try to get them to write one or two post on the weekend, so we’re talking about less than 25 posts a week and the average is like 15 to 20 for each writer. And that’s a lot.

And this insight was provided by Edelman agency executive Steve Rubel in response to the question “What’s your advice to people who are looking to make a serious go at professional blogging?:

“If you haven’t started by now, it’s extremely difficult to thrive. All of the good niches are taken and established. You either need to find an unmet need or catch on with someone else who is established.

That said, I believe people can succeed as professional content curators – but this will need to go beyond blogging. A good example of this is MuckRack.com and the network of properties Sawhorse Media is building.”

Rubel goes on to say it is harder to get people to come to blogs and that we are “living through the Attention Crash.” He speaks of “using a hub as a launching point for your content, syndicating it out to your “spokes” (eg the social networks where one chooses to engage) and then conversing about it in both locations.”

So what’s the conclusion from the State of the Blogosphere report and these interviews?

That doesn’t mean you can’t have a successful company blog to promote your business.  Sure you can.  And you don’t need 10 posts a day to be successful at it.  It just means if you have aspirations of of that blog becoming a self-sustaining media business, the bar is a lot higher.