The National Federation of Independent Business (NFIB) has released its November Small Business Economic Trends report.  When polled, small businesses believe conditions are getting a little better — but just a little. 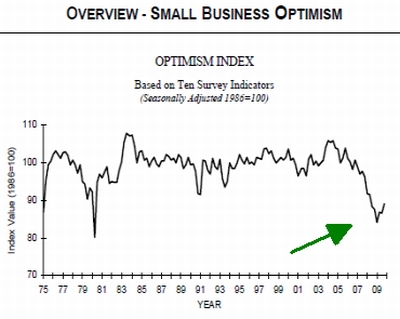 The Small Business Optimism Index rose 0.3 percent to 89.1 in October, as the above chart shows.

Employment: In the last three months, 8 percent of respondents had increased employment, but 19 percent had cut employment.

Capital Expenditures: Plans for capital expenditures in the next few months fell one point to 17 percent, just 1 point above the record low last set in August.

Access to Credit: Getting a loan continues to be difficult, with a net 14 percent of those who would like to borrow saying that loans are harder to get than the last time they tried. Thirty-three percent reported regular borrowing, unchanged from September. But there is little demand for loans, since most businesses have record low plans for capital expenditures and are postponing investing in inventory.

NFIB Report Conclusion: What does it all add up to? While access to capital is getting lots of press, the NFIB report suggests this is not truly the biggest issue facing small business. When asked what was the single most important problem facing their business, 33 percent said “poor sales.” (Most other concerns earned only single-digit percentages.) In contrast, “financing” was cited as the most important problem by just 4 percent of respondents. With record low numbers of business owners planning to expand, add inventory or make capital expenditures, there’s little demand for credit.

My Advice: if you want to help, go out and buy something from a small business.