Marketing to consumers’ cellphones has long been viewed as something of a holy grail by businesses – prized but always beyond reach. Recently however, new mobile technologies have gone mainstream, making the elusive goal of an always-on connection with customers firmly within reach of even the smallest business. 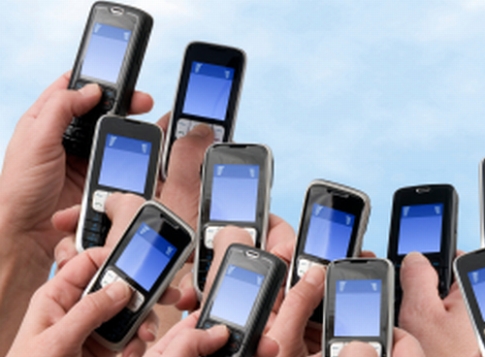 What may be less apparent, though, is how various mobile technologies are ready to leap off the inventor’s table and into your marketing toolkit as a small business owner. If, like many other small businesses, your greatest fear is “not marketing effectively” and your greatest pain is “poor sales” then check out these five top mobile marketing trends you can latch on to today to grow your business.

According to the Mobile Marketing Association, text message marketing is already the most widely-used form of mobile marketing, but you would be hard pressed to find it in use on Mainstreet U.S.A. That’s going to change in 2010, but first an explanation.

Think of text message marketing as you do email marketing, except instead of collecting an email address you collect a mobile phone number. Like email marketing, you create campaigns at a website and only send them to customers who have opted-in to receive your message. But unlike email, you don’t need fancy graphics, just up to 160 characters of plain ‘ol text. So even the most non-technical and non-marketing savvy small business owner can pick it up in just a couple of minutes. Your customers will instantly read your message 97% of the time.

Text message marketing for business use has been around for several years now, especially at youth-friendly establishments like fast food joints, hip clothing stores, and the nightclub scene. Already, a Comscore study shows that 25% of mobile phone users participate in at least one (and up to 10) SMS marketing program monthly.

But I expect 2010 to see far greater adoption due to:

The uses of texting are as varied as those of a swiss army knife: promotions, coupons, alerts, staff messages, sweepstakes, trivia, and voting. Whether you’re a barber shop, video store, or yoga studio, see what texting can do for you in 2010.

2) Texting will be offered by local media (e.g., newspapers)

With newspapers and magazines rapidly declining in circulation, it was only a matter of time until they sought to add new marketing techniques such as Mobile to their offerings. Money Mailer, which traditionally direct-mailed packets of coupons to households, is selling a mobile coupon that gets placed into their iPhone application.

Local print publishers are also getting in the game. For example Metro U.S., a local magazine publisher in cities across the U.S. is using text messaging to enable its “readers to instantly interact with the print.”

And in 2010 some of the largest media brands in the world such as Conde Nast will be teaming up to create mobile versions of their content in order to generate more advertising revenues.

3) Retailers will move beyond mobile marketing to enhance the overall shopping experience – raising consumers’ expectations of what they can do with their phones.

After several years of experimentation, big brands are poised to make mobile a significant – and permanent – part of their spend in 2010.

With these experiments having proved successful, look in 2010 for these pioneers to keep blazing trails with:

Each month it seems a new crop of mobile applications let consumers check for nearby deals and receive news and promotions to their phone from local businesses. These apps use a phone’s GPS to figure out where the consumer is and serve up your business’ information if he/she is nearby.

Some of these new apps, with colorful names such as Booyah, Whrrl, and Gowalla, even create a game-like environment where consumers ‘check-in’ and otherwise express their affiliation for the merchant in return for discounts. Other applications, such as MobiQpons, Yowza, and Google’s just launched QR codes, ditch the fun and games for a serious focus on mobile coupons.

A bit down the road, ‘augmented reality’ applications like the Sekei Camera iPhone application let a consumer point his phone at any real-world store or object and receive an overlay of rich data about the image. Clearly, not your dad’s rotary telephone!

But before you go rushing to build out your profile on the latest smartphone application, consider that smartphones made up only 25% of all new phone shipments in the U.S. in Q3 2009 and only about the same percentage of subscribers say they surf the mobile web at least weekly. So these hot new applications are attracting the mobile jet-set and Gen Yers but in 2010 will miss the mark if you are looking to reach anyone other than a small fraction of your total customer base.

If you don’t want to participate in another companies’ mobile application than why not have your own in 2010? In fact, about half of business’ mobile campaigns will send consumers directly to a mobile website and less than half to a smartphone application.

Price has something to do with this adoption. In 2009 and earlier, it could cost tens of thousands of dollars for a mobile-optimized website or smartphone application. But these days mobile website tools like Instant Mobilizer and MoFuse offer do-it-yourself tools costing anywhere from free on up to $100 per month or more depending on your needs.

There’s even an emerging crop of companies that let you build your own iPhone or smartphone application, albeit using a template-driven approach. Car dealerships, realtors, small hotel chains and other firms seem to be attracted to companies like MobileAppLoader for the easy set-up, low cost, branding, and potential for better customer servicing these more sophisticated applications offer.

Whether you like it or not, your company is going to be on the mobile phone in 2010 – it just may not be under your control. In 2009 many big players began rolling out mobile versions of their successful local, online directories. Expect that trend to accelerate in 2010.

In December, CitySearch rolled out its directory on Google’s Android platform, adding to its iPhone, Blackberry, and mobile web offerings already. OpenTable just announced its mobile offerings surpassed a cool one million reservations. Twitter now allows you to broadcast your location along with your tweets. And Yelp, best known for its polarizing – and highly successful – online ratings of local businesses, is already on Version 2.0 of its iPhone application that’s a hugely popular hit with its mostly urbanized crowd.

One of the more interesting emerging concepts is Google’s recent use of bar code stickers. The 800 lb Gorilla just mailed 190,000 of its most prominent local merchant’s fancy bar codes they can stick on their front windows. When scanned by a phone with a bar code scanning application, the bar code calls up that business’ Google Place Pages listing – which can incorporate a mobile coupon.

These mobile offerings typically use GPS to find nearby stores and restaurants, help consumers make real-time reservations, post mobile coupons, share feedback with friends, and submit reviews. What they won’t do is give your business maximum control over your brand and marketing since it’s someone else’s site. However you cut it though, these mega-sites are here to stay and are becoming a must-have for on-the-go savvy consumers.

2010 promises to be a breakout year for how small businesses use mobile marketing technologies. With the proliferation of low-cost, powerful smartphones, ubiquitous and fast high-speed connections, the exploding use of the mobile web, and the ubiquitous nature of texting, you now have many choices to be in the pocket of your customers. Perhaps the biggest question is where to start?