More of the Self Employed Incorporate

Although the incorporated share of self-employment declined slightly last year, the trend over the past two decades has been towards increased incorporation.

With all due credit to Steve King, who looked at this topic about a year ago in his blog, I’m offering my own take on it today.

In the figure below, I’ve plotted the incorporated share of self-employment since 1989 using data from the Bureau of Labor Statistics (BLS).  Since 1989, the share of non-agricultural self-employment that is incorporated has increased almost ten percentage points from 27.8 percent to 37.1 percent.  The pattern is pretty similar when the agricultural sector is included.

This trend is about as close to a true linear trend as one gets with real economic data.  For self-employment in the agricultural and non-agricultural sectors combined (the thick red line in the graph), the fit of a straight line to the data is 0.97 (it would be 1.00 if the increase in the actual data over time was a perfectly straight line). 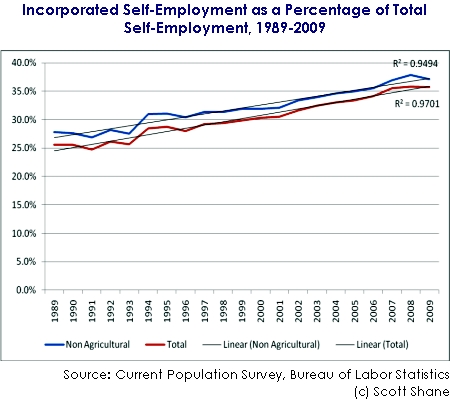 So why are more self-employed people incorporating? Several possibilities come to mind (some of which were highlighted by Steve King and other authors in their posts):

Unfortunately, these possibilities are only speculation on my part. While the trend towards greater incorporation of self-employment is clear from the data, researchers haven’t yet identified the causes.

And that might not be so easy to do. Despite a clear linear trend toward greater incorporation of self-employment over the past two decades, the vast majority of self-employed people still don’t incorporate. Therefore, any explanation for this upward trend needs to account for why the increase is very gradual and remains confined to a minority of those in business for themselves.