Where are All the Women High-tech Entrepreneurs? 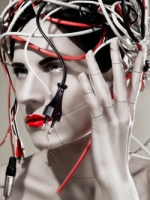 But there are also many similarities. In general, men and women entrepreneurs had equivalent education, an early interest in entrepreneurship, similar work experience and similar access to financing. They also shared the same motivations: the desire to make money, to be their own bosses and to see their ideas come to fruition.

Given the similarities, Wadwha writes, “We remain perplexed by the dearth of female startup executives. Evidence suggests that this does not reflect a failure on the part of women but rather a societal failure.”

Cindy Padnos, managing director of Illuminate Ventures, has researched the role of women in high tech. Illuminate Ventures’  research found that women-led high-tech startups generate higher revenues per investment dollar and are less likely to fail than those led by men. Women-led venture-backed tech companies are also more capital-efficient, starting with one-third less capital than those owned by men but reaching similar revenue levels in the same time period.

Given the practical advantages of women-led businesses, Padnos is confident that the number of women in the technology industry will grow. Wadwha notes that in India — a much more conservative country than the U.S. — women are rapidly taking top roles in business. Rapid change in India’s economy may be one reason women are more accepted as businesspeople.