Who creates more jobs – young firms or old firms? This is an important question today as policy makers allocate resources to try to reduce high levels of unemployment in this country.

Writing in the Creative Class blog, Professor Zoltan Acs of George Mason University said that there are two stories about age of firms and job creation, one by him and one by Carl Schramm of the Ewing Marion Kauffman Foundation. Schramm and his colleagues argue that younger firms create more jobs than older ones. Acs and his colleagues argue that older firms create more jobs than younger firms.

In his post, Acs says, “They both can’t be right.” But actually, they can -because of what the studies show and don’t show about the data they examine.

SCHRAMM’S STORY
Referring to a Census Bureau study in an Op Ed in the Wall Street Journal, Schramm and his colleagues write, “according to the Census Bureau, nearly all net job creation in the U.S. since 1980 occurred in firms less than five years old.”

To get this figure Schramm and his colleagues include all job creation by firms of different ages, including that which occurs as a result of firm creation. Below I’ve created a figure from the (latest available year of) Census data to which these authors refer. And, like Schramm and colleagues say, firms aged zero to five are net job creators. 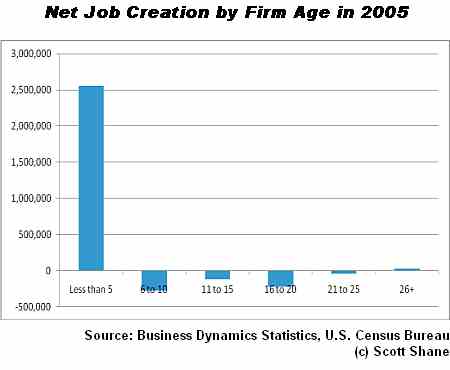 While Schramm and colleagues’ argument is technically correct, it misses a key point about the data, which gives the impression that young firms are greater job creators than their more mature counterparts. The act of firm formation accounts for most of the net job creation in the economy. Separate out firm formation from the operation of young firms and one finds that young firms – those aged one to five – turn out to be net job destroyers. In fact, they destroy more net jobs than older firms. Below, I’ve reconstructed the above figure to show what net job creation looks like by firm age if we separate firm creation from young firms. 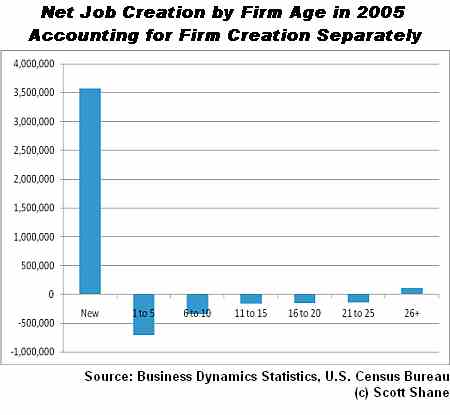 ACS’ STORY
In a study conducted for the Small Business Administration, Acs and his colleagues found that the average “high impact” firm – companies that have high sales and high employment growth – was about 25 years old. From this they conclude that older firms are the biggest job creators.

In their analysis Acs and his colleagues looked at how many jobs the firms created or destroyed in the years subsequent to their founding. It’s a perfectly reasonable approach, but it requires leaving aside the job creation that occurs as the result of firm formation.

Below I have created a chart of the Census data I’ve been describing to measure the argument made by Acs and his colleagues- net job creation after firms have been founded. The shows that Acs and colleagues are right, the older firms are the net job creators. 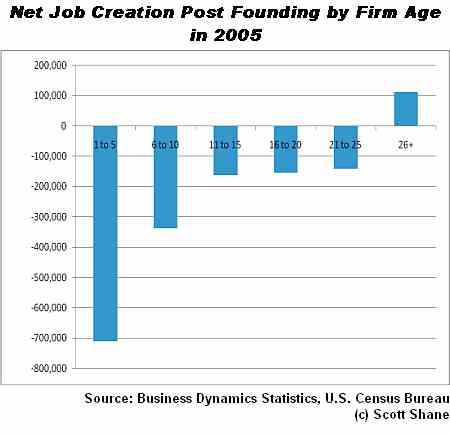 But there is an important caveat. Neither young firms nor old firms account for much net job creation when compared to the amount that comes from firm formation.

Whether younger or older firms create more jobs is an important policy question. Unfortunately, the patterns we see from the data are too dependent on our assumptions to tell us the answer.