Expansion in the Small Business Sector?

There’s a good news-bad news story about small business expansion plans in the some recent data from Discover Small Business Watch, a survey of a random sample of 750 small business owners with five or fewer employees. The good news is that things improved in January. The bad news is they got worse again in February, leaving us pretty far from where we were before the recession started and without any sort of trend towards improvement yet. 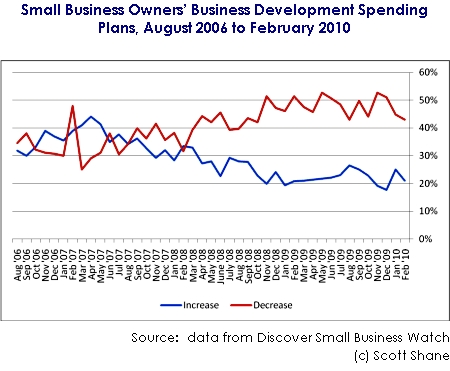 There was some improvement so far this year over the end of last year, but there’s still 22 percentage point gap between the fraction of owners that plan to decrease spending and the fraction that plan to increase it.

The situation with hiring plans is less clear. As the figure below shows, the share of small business owners who plan to hire jumped in January 2010 and showed a steady decrease in the fraction that plan to lay people off from August of last year through January of this year. But then things got worse again in February, with the percentage of businesses planning to hire dropping to 5 percent. As a result, we again have fewer owners planning to hire than planning to lay people off.

Moreover, we are far from the consistent pattern of more owners planning to hire than to lay off like was present from the survey’s initiation in August 2006 through August 2007. And just 5 percent of small business owners intending to add staff doesn’t bode well for improvement in the employment numbers in the small business sector any time soon. 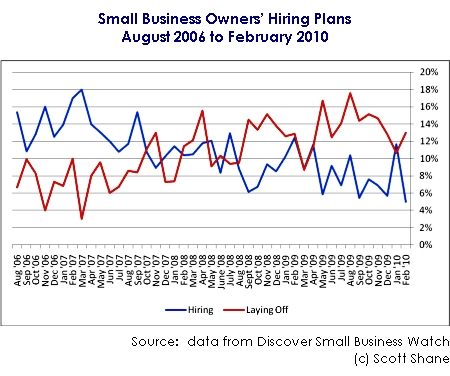