Are Small Businesses Hiring Yet?

America has lost more than 8 million jobs since the Great Recession began. And even though most economists believe the recession ended last summer, unemployment remains at 9.7 percent. We clearly need more job creation.

Because half of all jobs in the U.S. are in businesses with fewer than 500 employees, small businesses need to begin creating jobs if we are going to replace the millions of lost jobs. So are small businesses hiring yet?

Recently, I took a look at some key data sources to answer that question. While a couple of indicators suggest an answer of “yes,” most do not.

Let’s start with the most positive measure. As you can see from the figure below, the Intuit Small Business Employment Index, which is based on “online data from approximately 50,000 small business employers with fewer than 20 employees who use Intuit Online Payroll,” shows that small businesses have been hiring since mid-2009. According to the Intuit Index, small businesses have added 150,000 jobs since last summer. 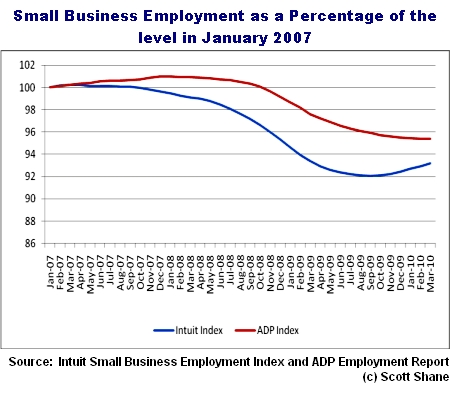 However, the ADP Employment Report, which measures the number of people employed in establishments of fewer than 50 employees using numbers from ADP’s payroll data, doesn’t show the increases seen in the Intuit data.

Two other sources – Discover Small Business Watch and the National Federation of Independent Businesses’ Small Business Economic Trends – don’t look at actual payroll data, but instead survey small business owners about their hiring plans. The Discover Small Business Watch, which is a monthly survey of a representative sample of 750 business owners with fewer than five employees, includes a question about hiring plans over the next few months. The figure below shows the percentage of respondents who say that they plan to hire minus the percentage that say they plan to play off workers in coming months. While the figure shows that the declines in the measured experienced over 2007 and 2008 have stopped, the measure currently remains in negative territory. 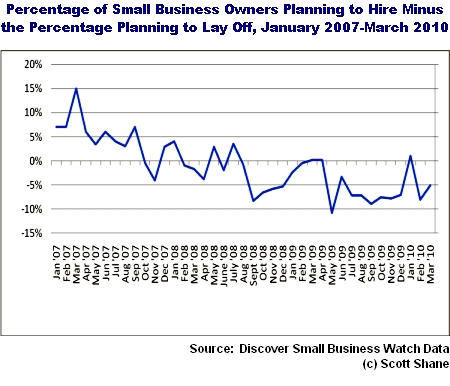 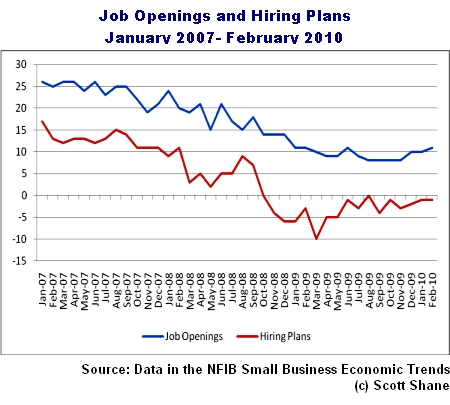 Compensation and work hours at small businesses also remain weak. The Intuit Small Business Employment Index shows no increase in compensation or work hours since September of 2008. The NFIB measure of the percentage of small businesses increasing compensation minus those decreasing it over the previous three months has been largely flat since February of 2009, having declined dramatically from January 2007 until that time.

In short, while there are a couple of indicators that small businesses are starting to hire again, when taken together, the different measures don’t show any evidence of a clear revival in small business hiring.