This week I am returning to a topic that I have written about several times since the recession began: what’s been happening to self-employment in the down economy and how it compares to the job situation in the rest of the private sector.

Below is a figure I created from the Bureau of Labor Statistics data on the seasonally adjusted numbers of nonagricultural self-employed and private sector wage employed people in the United States from January 2007 through March 2010. The numbers are set as a percentage of their level in January 2007 to show the relative amount of self and wage employment each month since then. The thick blue line shows the figures for self-employment, while the thick red line shows the corresponding numbers for wage employment. The thin black lines running through each of the thicker lines are the six month moving averages. 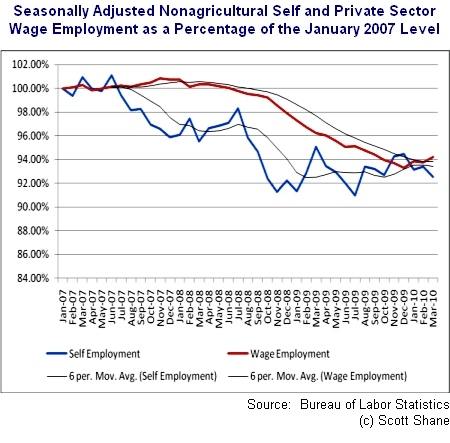 But there are also substantial differences in what has happened to the self-employed and people working for others in the private sector. First, the self-employment numbers are much more volatile than the private sector wage employment numbers. There have been several increases in the number of self-employed people since January 2007 that then disappeared in subsequent months. For wage employment, by contrast, the pattern has been periods of no decline and periods of consistent decline.

Third, the decline in self-employment was very steep, but bottomed out in October 2008. Since then the trend has been flat to a slight increase. In contrast, wage employment has shown a slower decline, but one that continued longer, accelerating slightly in October 2008.

Fourth, in recent months – since December of 2009 – private sector wage employment has begun to slowly turn around. But self-employment, which had been improving for close to six months turned negative again.

All of this means that we can’t extrapolate from what is happening to private sector jobs to explain trends in self-employment. We need to look at self-employment trends themselves.