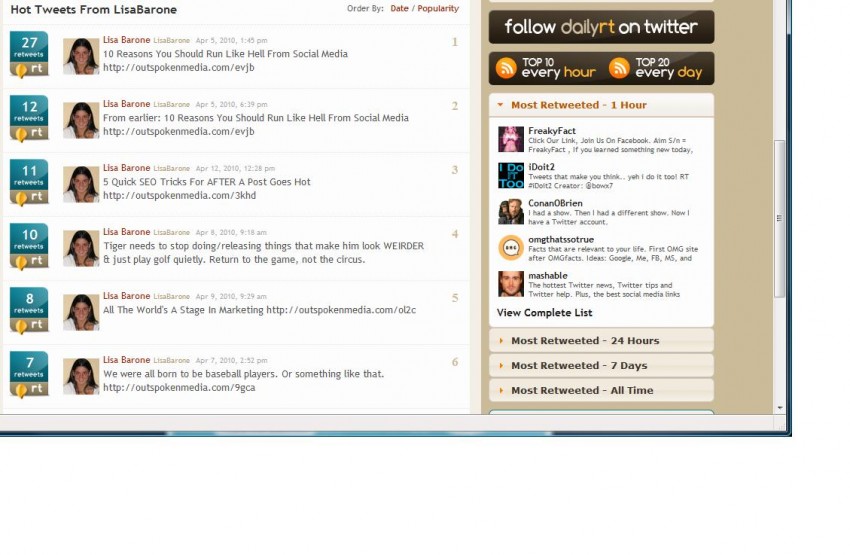 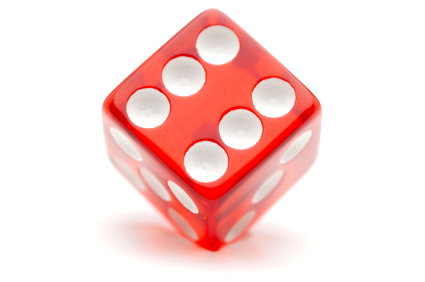 It’s said that on Twitter it’s not the number of followers you have that counts, it’s how many times you’ve been retweeted. And there’s some truth to that. While follower counts can be tricked, inflated or simply represent the number of people actively ignoring you, retweets show people actually engaging with what you’re putting out there. Having your content retweeted by your network means adding exposure, additional authority, and, more importantly, that people like what your brand is doing or saying. And that’s a pretty big metric to keep an eye on while participating in social media.

Last month I wrote about 5 ways to track Twitter sentiment. After that post, SmallBizTrends reader Mark Harbeke emailed me looking for tools to help him track retweets. I was able to offer him couple early recommendations, but it made me want to dig deeper to see what was available for SMB owners looking to track retweets.

Here are some of the most valuable tools I stumbled across to help SMB owners measure influence.

All things start here. If you’re simply looking for a way to track retweets, then setting up a Twitter Search for [RT @username] and subscribing to the RSS feed will give you a very low maintenance way to do so. Of course, that’s also all you’re going to get with this option – no stats, no history, no nothing. But for some SMB owners that may be enough or even preferred. To be honest, while it’s not incredibly sexy, using Twitter Search to create an RSS list of terms I’m watching remains my preferred way to track mentions on Twitter. But I’m kind of boring.

This is one of my favorite retweet tools because it offers a lot of functionality for SMB owners looking to track their own Twitter success, as well as do some competitive intelligence on others. Daily RT allows SMB owners to see account follower numbers, how many RTs a user has made, how many times that user has been RT’d and the most popular content tweeted from that user. It’s that last statistic that I find especially valuable. Knowing what content your competitors are tweeting and what they’ve seen success with gives you insight into your own editorial calendar and what your community likes to hear about. It’s a breeding ground for strategy and new content ideas. I see Daily RT as much more of an all-round Twitter competitive intelligence tool than simply a tool for tracking RTs, but you can use or ignore as much of its functionality as you’re comfortable with. This is probably my favorite one of the bunch.

Tweet Reach takes a different approach with things and aims to measure how many people could have seen your tweet/link based on who retweeted it, how many people follow them, and how many followers you share between you. Once all that’s been calculated, you’re presented with a graph of your results.

I often hear Tweet Reach being talked about by SMB owners, though I don’t think it’s the most powerful tool of the group. As is, Tweet Reach will only search through your last 50 tweets, so it may be somewhat limiting depending on how much you tweet. You can buy their $20 report in order to access your “full” results.

BackTweets is a great way to find out how many people are RTing or passing on a certain link that you tweeted. What makes it so valuable is that BackTweets will “count” the link regardless of how it was tweeted so you don’t get fragmented results based on URL shorteners.  For example, one search for [yourdomain.com/title] will show all mentions of that link, regardless of whether they used bit.ly, tinyurl, owl.ly, etc.  This helps to make monitoring considerably easier.  You can also sign up to get email alerts so you don’t have to keep checking back with the site.  Though I don’t use it to track retweets, BackTweets has long been my preferred way to track links passed through Twitter.

Though the look of this one is a little less refined, the functionality is surprisingly good. Enter in your username and ReTweetist will populate a list of your recent retweets and the users that retweeted them. You also have the option to enter in a URL instead of a username to see the same data (though that seems to be a bit wonkier). I like this one for SMBs looking to do some competitive intelligence because it also notes how many followers a particular account has and how often they tend to get retweeted, which is handy information to know. If you see that a competitor is being retweeted 500 times a week and you’re only being retweeted 100 times a week, you may want to take a closer look at their Twitter strategy and what’s working for them. Or go back up and use Daily RTs to get a sense of their content ideas.

Retweet Rank is different from the others in that it attempts to rank users by how often they’re retweeted and assigns a numerical score. If you’re looking to benchmark how you do against some of your closest competitors, that feature may make this tool more useful other some of the others. 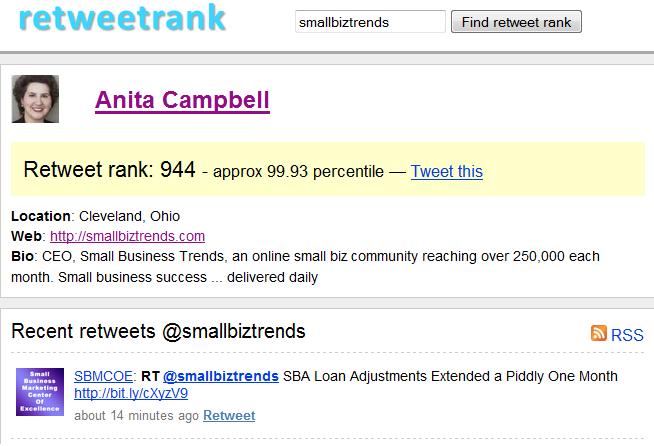 Retweet Rank also breaks out your most recent retweets and suggests other users you may be interested in following and/or checking their stats. Once set up, there’s also an option to get your search via RSS so you don’t have to keep referring back to the site.

Coincidentally, Retweet Rank was one of the initial tools that I mentioned to SmallBizTrends reader Mark and he was kind enough to write a primer for SMBs looking to get set up on Retweet Rank. I recommend you give it a read.

Those are my favorite ways to track retweets on Twitter. Any great tools I’ve missed?