Start-ups Have Been Shrinking

In an earlier post, I wrote about the large share of net job creation that comes from new firm formation.

The importance of firm formation to net job creation raises the question: Over time, are newly formed businesses employing more or fewer people? Given the number of net new jobs created from firm formation, a decline in startups’ average employment could pose problems for our economy’s ability to generate the jobs we need to reduce current levels of unemployment.

To figure out what has been happening to the initial employment of new businesses, I took a look at data from the Longitudinal Business Database of the U.S. Census (see figure below). The vertical axis measures the average number of employees per new business in its founding year. The blue bars show the average number of employees in new firms by year. The black line shows the five year moving average of that figure. 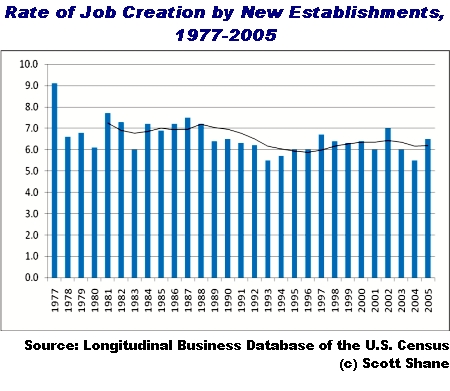 Unfortunately, the Census data is only available through 2005, making it difficult to know if the trend toward lower average firm size it shows is continuing. To see what has been happening more recently, I took a look at Bureau of Labor Statistics (BLS) data. Below is a figure that shows the average number of employees at new businesses established in each quarter from the first quarter of 1999 through the second quarter of 2009. The pattern is a decline in the average size of start-ups, from 6.6 to 4.2 employees. 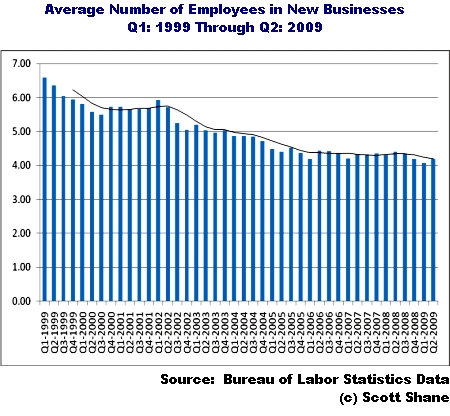 That leads me to a final question:  If those additional businesses don’t get formed, will we remain stuck with current high levels of unemployment?

Scott Shane is A. Malachi Mixon III, Professor of Entrepreneurial Studies at Case Western Reserve University. He is the author of nine books, including Fool's Gold: The Truth Behind Angel Investing in America ; Illusions of Entrepreneurship: and The Costly Myths that Entrepreneurs, Investors, and Policy Makers Live By.
12 Reactions
Subscribe
Follow @smallbiztrends
RSS LinkedIn Pinterest iTunes