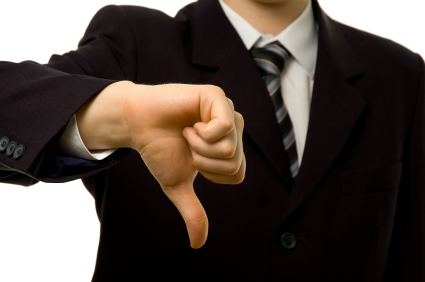 I tightened up my Twitter follow list yesterday. I like to do that every month to filter out the voices I’ve stopped listening to and to hopefully add in some new ones. The whole process made me curious as to why other Twitter users may decide to unfollow someone. So, I thought I’d ask. And the results of my quick Twitter poll were so interesting I thought I’d share them.

Basically, people will unfollow you for anything. 😉

Here were some of the reasons mentioned by my Twitter followers:

1. You’re a self-promoter: Lots of people mentioned that they were turned off by Twitter users who do nothing but promote their own content. While lots of us have businesses and blogs we’re trying to get the word out about, it’s important that you also take time to listen and support what everyone else is doing. You don’t want to be the guy that puts the “me” in social media.

2. You have anger issues: Twitter users like @kevinmarshall mentioned that too much bickering or negativity was another reason they’ll unfollow someone. No one wants to surround themselves with someone who never runs out of axes to grind.  Too much angry tweeting and we unfollow you hoping you’ll go outside and calm down.

3. You’re too self-centered: For folks like @EcoEndeavors and @rhythm7a, too much self-centered tweeting about what you’re doing today, what you’re wearing, or how awesome you are is also grounds for an unfollow. Again, people like it when you’re more interested in them than yourself. Even if you have to fake it.

4. You offend people: This should go without saying but blatant racist, sexist, homophobic or other offensive comments are a great way to get yourself unfollowed. Both @michellerobbins and @conniereece agreed on that.

5. You’re too unprofessional: Too much tweeting about how drunk you got last night, whom you were with or how much you hate your coworkers tends to make everyone a little uncomfortable. And then they unfollow you so they don’t have to feel uncomfortable anymore. 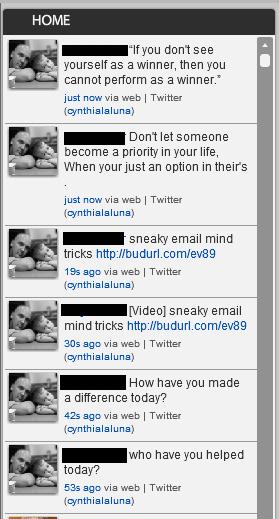 6. You’re a flood tweeter: Both @Vancetera and @KevinMSpence commented that flood Twitters typically earn themselves an unfollow. A flood tweeter is someone who will rapidly tweet back to back so that all you see is a ‘flood’ of their avatar. It looks like this. [Thanks @CynthiaLaLuna for the screenshot.]

7. You’re fake: If you’re upbeat all the time, prepare to be unfollowed. Folks like @ThoughtsHappen, @TheRedHeadSaid and @KevinMRyan and all commented that if you’re never angry, it’s a clear sign that you’re not a real person. They want to see some balance. In order to love something, you have to at least not like someone else. Give people both sides.

8. You auto-DM:   Nothing hurts more than choosing to follow someone you think is cooland then being hit with the dread auto spam DM. Ouch.

9. You get political: With 140 characters it’s hard enough to have a conversation about what you’re eating.  Let’s agree to save the conversations for how to fix the world for times we’re face to face. On Twitter, they typically just devolve into angry name-calling.

10. You don’t share anything new: Folks like @justjulie and @rickstoner commented that one reason they’ll unfollow is if the person isn’t sharing anything new. Typically that means incessant retweets of what Mashable and all the other A-listers are putting out there. We know they’re smart, but what are YOU bringing to the table?

14. You tweet too much: For @rhythm7a that number was more than 25 tweets a day, but everyone will have their own comfort levels. I probably tweet 25 times before lunch.  😉

15. You don’t tweet enough: I didn’t know this could be a probably but@joshuetitsworth and @etcpolitics both commented that if you don’t tweet ENOUGH, they may also unfollow you. @LoriBourne even provided a tool called Untweeps which will weed out those who don’t tweet often enough.

16. You’re obsessed with the iphone/ipad: Okay, so maybe @CherylMcKinnon just made me laugh with this one. But it’s true!

17. You’re a spammer: You tell people how many followers you can get them overnight (thanks @jakelacaze) or you send me tweets that look like this: 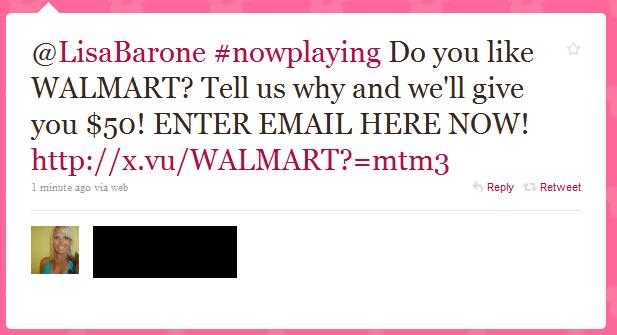 18. You have no personality: This was a big one with people like @shakez. If you’re not showing your personality and giving people a taste of who you are, then they’re bound to go elsewhere. It’s called social media for a reason.

19. You’re a link dropper: This was noted by @dj_justjay, @kristinmc and @rongraham1 as a big reason for unfollowing. If you’re all links and no talk, you’re not providing much value to your Twitter stream. And people aren’t going to stick around for very long.

20. You use the official Retweet button: Believe it or not but some people are still mad over Twitter’s new Retweet feature and will actually unfollow you for using it. Both @godhammer and @sugarrae are believers of this commandment.

I was pretty amazed by all the reasons people gave for unfollowing someone. Personally, I don’t think there’s a “right” or “wrong” way to Twitter or make friends on the Web. However, it is important to know what kind of tweets your particular audience finds useful so that you can help increasing your value on their eyes.  I know I break at least half of these “don’ts” on a daily basis, but it works for me. You have to find what works for you.  Consider asking your followers why they followed you in the first place.

What makes you unfollow someone?