Everyone knows that a lot of jobs have been lost during the Great Recession. And almost everyone would like to find away to avoid such high levels of job loss in the future.

Doing so requires an understanding of where layoffs have been heaviest and where they have been lighter. By identifying factors that mitigated job destruction, we might be able to reduce employment losses in the future.

This is why I am concerned that the Administration is looking in the wrong places to understand the job losses. Recently Alan Krueger, the Assistant Secretary for Economic Policy and the Chief Economist of the U.S. Treasury testified before the Joint Economic Committee of Congress about “job losses in the recession.”

His testimony and the analysis that supported it focused heavily on the differences in job loss between establishments of different sizes. He wrote,

“Many small businesses responded to the shock of the financial crisis by quickly laying off workers and shutting down operations, while the first line of response for larger companies was to freeze hiring. Large companies also increased layoffs over the ensuing months. This pattern is consistent with small employers having lower fixed costs associated with hiring and employment than large employers. It is also consistent with small companies being unable to access credit to maintain employment when demand for their products collapsed in late 2008. Larger companies, which also faced frozen credit markets and declining product market demand in the fall of 2008, eventually had access to corporate debt markets, which enabled them to reduce layoffs and expand employment as the financial markets improved in 2009. Small businesses, which are more dependent on bank financing which remains tight, however, are still facing severe challenges.”

Nothing in his statement said anything about differences in job losses across sectors of the economy.

What’s important than establishment size is industrial sector. Just the crude division of establishments into “goods-producing” (which includes manufacturing and construction) and “service-providing” sectors, as Automatic Data Processing does in the ADP Employment Report, is informative.

In the figure below, I have charted employment as a share of the level when the recession began in December 2007 for every month from then until April 2010. I have included separate lines for large and small establishments in the goods-producing and service-providing sectors. 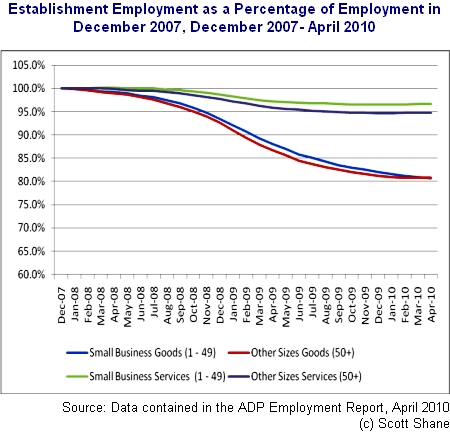 The figure clearly shows that differences between sectors is much greater than differences between establishment sizes. While there is some gap between the lines that measure large and small establishments in both the goods-providing and the service-producing sectors, the big difference lies between the two lines for each sector. In April 2010, service-providing sector employment remained above 95 percent of its December 2007 level for both sizes of establishments, whereas goods-producing employment was only slightly above 80 percent of its December 2007 level for large and small establishments.

To me this picture says that establishment size had an effect on job loss during the Great Recession, but industrial sector was a much bigger factor. Goods-producing businesses got walloped, while service providing businesses were much less affected.