The (Long Term) Jobs Trend is Better at Smaller Establishments

Because the recession has been quite severe, a lot of the recent discussion of employment has focused on the time period since the recession began in December 2007. As you no doubt know, over that time period, the jobs picture hasn’t looked pretty in businesses of any size – small, medium, or large.

But if we look at the jobs situation over a longer period of time – since 2000 – the pattern is different, particularly across businesses of different sizes.

In the figure below, I have plotted the number of people employed in small, medium, and large establishments relative to their level in December 2000, using data collected by Automated Data Processing (ADP). ADP reports monthly numbers on employment in small (1-49 employees), medium (50-499 employees) and large (more than 499 employee) private sector establishments that use its payroll services. 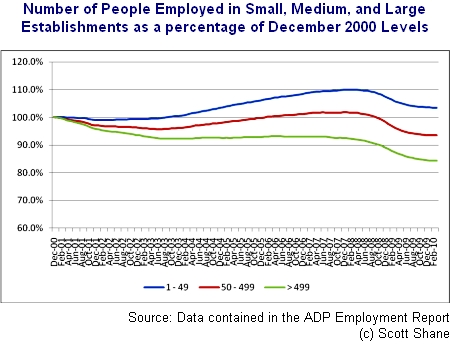 The substantial job loss from the recession in all sized establishments is clearly visible in data. Employment in March 2010 is well below what it was in December 2007 when the recession began.

Second, during the period between the last recession and the current one, small establishments added a lot of jobs. So many, in fact, that they currently employ 103.5 percent of the workers they had in December 2000.

We have to be a little cautious about drawing conclusions about companies from these data because establishments are not firms. The U.S. Census explains, “an establishment is a single physical location where business transactions take place and for which payroll and employment records are kept,” but firms are “groups of one or more establishments under common ownership or control.”