Trends in Exits from VC-Backed Investments

Recently there has been a lot of discussion of what the recession has done to venture capitalists’ efforts to exit their investments. Clearly, the bad economic situation has made cashing out more difficult, but viewing the data over time suggests that the economic downturn may have only exacerbated longer term trends.

Looking at the numbers back to 1992, I see three strong patterns:
• A shift to mergers and acquisitions as the primary exit mode that began in the late 1990s.
• A decreasing share of VC-backed investments resulting in exits that began around the same time.
• A decline in the real dollar value of exits through IPO in the aftermath of the Internet bubble.

TREND AWAY FROM IPOs

While the number of venture capital-backed IPOs dropped substantially in 2008 and 2009, the figure below shows that this decline is part of a longer term trend. Since the late 1990s, exits from venture capital investments have been primarily through acquisition, a very different pattern than in the early to mid-1990s when IPOs and acquisitions were equally common. 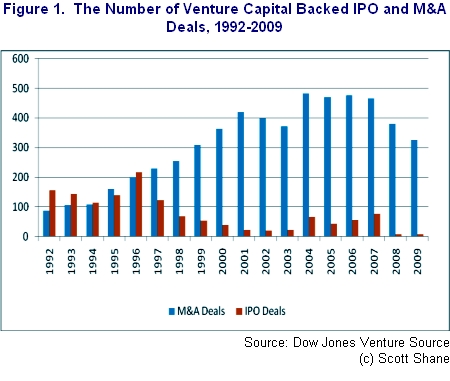 DECREASING RATIO OF EXITS TO INVESTMENTS

Since the end of the 1990s, the share of venture capital investments with a positive exit has dropped substantially. While the economic downturn left IPOs as a percentage of companies financed five years earlier at a paltry 0.3 percent, even the pre-recession numbers are not that robust. As the figure below shows, the ratio of IPOs to investments made five years before has not exceeded five percent since 2000; yet it did not fall below five percent from 1992 through 1999.

Adding in acquisitions improves the picture some. But since 2001, total exits as a percentage of investments made five years earlier broke 17 percent only once, while this ratio never failed to do so from 1992 through 2001. 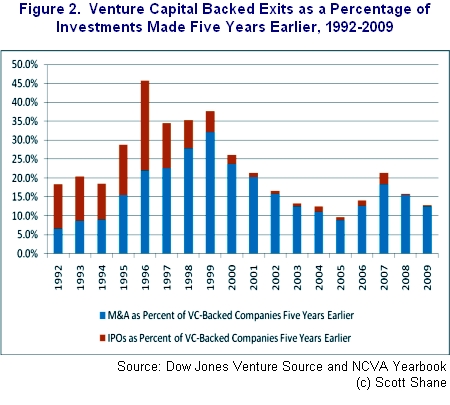 THE AMOUNT RAISED FROM IPOs

Here the longer term trends are less obvious. For M&A deals, there doesn’t appear to be a clear pattern to the size of the average deal. But as Figure 3 shows, the average IPO tended to increase in real dollar terms from 1992 to 2002, and has shown net downward movement since then. 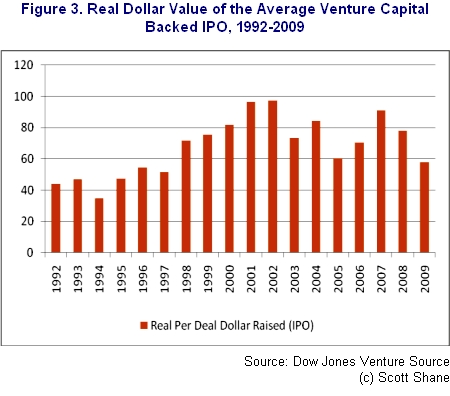 In sum, venture capital-backed exits were adversely affected by the Great Recession, but the declines are part of a greater long term trend. Exits have become rarer and more likely to occur through mergers and acquisitions than through IPOs. Moreover, the average VC-backed IPO is significantly smaller now than in the early 2000s.