How to Rewrite Your Job Instead of Retiring 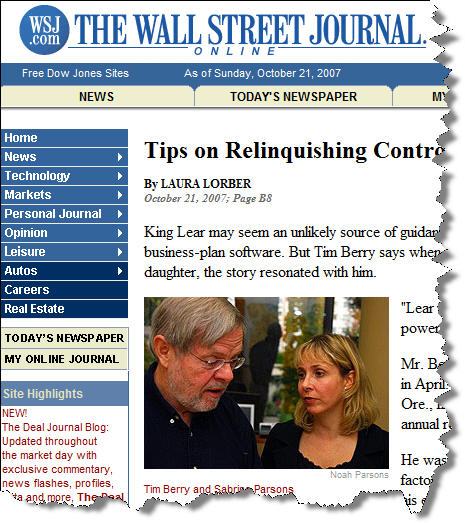 It’s been three years now since the Wall Street Journal published that story in the picture here, about our change at my company. I was tired of running the day-to-day aspects of the business. Management is all those meetings. As the company grows – we had more than 40 employees and multi-million-dollar sales – the founder’s job changes. I didn’t particularly like managing, but that was my job, so I tried to do my best.

I had a team ready. I can’t claim this was great planning, but it was true. It just happened. We’d talked generally about me retiring, sometime in the distant future. But by the time I made the move, they were ready. Bright younger people, and one of them in particular, dedicated, experienced in Silicon Valley, UK entrepreneurship, the industry as well as our company, Princeton degree, and, yes, also my daughter.

Retirement, however, sounded terrible. I don’t like golf or fishing; and, while I do like writing, I like writing about business, and business planning, and business management. I love the business I’m in, and what I do. My wife (of 40 years) and I agree I’d be bad at being retired.

Does that situation sound familiar? Right. I’m hardly the only one. And if you’re not yet in your 50s, thinking this doesn’t apply to you, because (damn) time is the most powerful force in the universe. If you’re reading this, you’re getting older.

So now, three years into this, looking back at it, I’m still full-time employed, I work as many hours as ever, and I love it. And the company has better management now than it would have. So here are two key things that worked for me:

1. Find something inside the business you love

For me it was writing, blogging, speaking, etc. This blog posts, several blogs in fact since I named the new CEO in April of 2007 I’ve done slightly more than 2,000 blog posts, and three books. And speaking, and teaching. And this was perfect for me and my new management team, because I need work and activity to be happy, and I need to believe it’s important, and good for the company. But the new team needs space, and authority, and the power to run the company. So they needed me to stay busy. Doing something else. But I didn’t have to give up what I love, which is what the company was built around. I just write about it, instead of manage it.

It turns out that it wasn’t just me: If you go study your psychology, it’s natural to want to change things when you get into your upper 50s. And, depending on what you’ve been doing, a lot of us have some creative juices we haven’t had time for. There’s a lot of research around the idea of doing something creative when you look for that new job.

So I do suggest that if you’re in the situation I was in, you try to find an inherently creative new job, preferably something you’ve wanted to do. Maybe in your case it’s programming, or graphic arts, or copy writing, web design I don’t know. But in my case it was something I’d wanted time to do more of. And it’s part of the business. The company needs it. But it doesn’t interfere with the new management.

2 . Make clean break and stick to it.

If you put somebody else in charge, then you’re not in charge and you have to remember that. In the beginning, people in the company will come to you with problems, because they’re used to that. Don’t answer them, don’t try to solve their problems. Send them to the new management. Enjoy not being in charge.

I didn’t follow the standard succession strategy, the one most often recommended in the literature of succession, of making sure all the stakeholders were on board. And, in retrospect, that might have made it harder for the team that took over. But I did make a clean break. It was like stopping the car, getting out of the driver’s seat, and asking somebody else to take over. In one fell swoop.

And yes, letting go is hard. It’s not for nothing that “letting go” is a theme of so much song, story, and blog posts. In my case, 2007 was followed by 2008 and the big recession, so the new team had to navigate some tough times. That was a baptism of fire. I suggested they cut people, but they stuck to their plan instead, didn’t let anybody go, and ended up right, and the company was stronger for it. Whew.

Now, in a sort of conclusion, I have to admit that what worked for me might not work for you. There was a team ready to go, and there was a job needing to be done that I really wanted to do. But in might work for you, or it might help you figure out what will work. And in my case, three years later, our company is well run and growing. And I love my present job.