The Best Software I Don’t Use

Irony: I’ve used tablet computers happily for years now, (check this post on this blog from 2007), and the thing I liked most about them, Microsoft OneNote, is not available on the new iPad. And I do really enjoy my iPad too. But, damn, I do miss Microsoft OneNote, part of the Microsoft Office. Combined with a stylus and a tablet computer, OneNote is as if you took that spiral notebook you depended on in college and automated it. 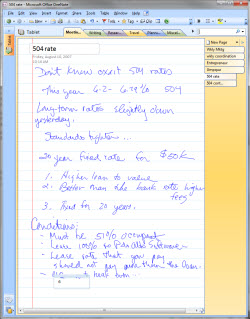 With OneNote, you take notes as notes, writing in hand, just like you did in college and you do now at meetings. You take your notes as notes. You hold the tablet computer like a notebook. In a meeting you’re completely normal, no laptop on the table, taking notes like everybody else. But in your case, because you’re on a tablet computer with OneNote, you can automatically set pages, subpages, and sections, so you organize your notebook easily. By date, category, tag, whatever you want.

And – note that this is real computer magic – on a tablet computer, OneNote will leave your handwriting as handwriting, if you like, with no struggle about character recognition, but still be able to search all your notes for text. Yes, it does the recognition it needs for text search in the background, on the fly, and it’s fast and efficient and finds stuff like you wouldn’t believe.

I so wish they’d give me OneNote on my iPad. I did find the Penultimate iPad app, which, combined with a special stylus I ordered for $10, gives me a notepad with pen application. And it’s not bad but it’s nothing like OneNote.

As I write this, I’m thinking one of the good things about the computer world playing follow the leader all the time is that there may soon be some smaller slick iPad-like Windows-based tablet computers, with the iPad’s fabulous fun features and battery life, that might also run Microsoft OneNote. And if you haven’t already blown your budget on the iPad, that might be worth waiting for.

Ah yes, the trials and tribulations of the early adopter. Sigh