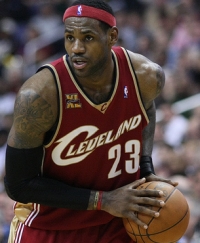 Perhaps you noticed that Ohio recently lost a successful entrepreneur who moved his business to Florida, where taxes are lower.

Of course, like many entrepreneurs who relocate their businesses to low tax states, his decision was only partially influenced by taxes. Other factors, specifically his desire to build a global brand name, were more important. But Ohio taxes didn’t help.

Basketball isn’t my forte, so I’m going to stay away from evaluating whether James would have been more likely to win an NBA championship if he’d stayed in Cleveland, gone to New York, or chosen somewhere else to play.

Instead, I’m going to focus on how differences in state income taxes in Ohio and Florida might have influenced his decision to relocate his business – at least at the margin.

Let me start by pointing out that LeBron James is an entrepreneur. Like many Americans, he both works for someone else and has his own business. Or in his case, I should say businesses. Among James’ companies are LRMR Marketing, a sports marketing business he created in 2006, and King James Inc., which contracts with companies seeking his endorsement, and owns stakes in other ventures.

James isn’t just any old entrepreneur, he’s a savvy one. As a 2007 CNNMoney article said, “Instead of just lining up endorsements and cashing checks, James is seeking equity in the companies he works with; and he is using his on-court prowess to build a corporation that deals with entities as disparate as Bubblicious and Warren Buffett.”

James’ entrepreneurialism brings me to his decision to move. In describing it, James said, “This is a business.”

Perhaps, like many entrepreneurs, James was thinking about where his business would be most successful.

Moving his business operations to Florida will save James a lot of money. According to the Sportslaw blogspot, King James Inc. earns approximately $28 million a year in endorsements. By moving to Florida, which has no state income tax James will save about $1.7 million per year in taxes on his endorsement business.

Don’t think that James doesn’t pay attention to the effect of taxes on his business activities. According to CNNMoney, his decision to create King James Inc. to deal with endorsement partners saved him a bundle in taxes. As I said, we are talking about one savvy entrepreneur here.

So, like many entrepreneurs, James probably considered the tax benefits of relocating his business to Florida. According to Brian Windhorst of the Plain Dealer, Miami Heat President Pat Riley seemed to think so. Windhorst writes, “Riley knew the lack of a state income tax in Florida could help him sell [the decision to move to Miami]. [He] had his salary-cap specialists create displays to show how Florida taxes could save James money.”

Now back to my initial point about Ohio’s loss of a successful entrepreneur. The state doesn’t have that many of them to lose. According to data from Ohio tax authorities, only slightly more than 3,000 Ohio corporations generate the level of revenue that King James Inc. brings in annually.

State officials are often interested in economic impact numbers. And James’ are high. Before James made his decision to move, the Freakonomics blog estimated that “Cleveland and the state of Ohio might be hundreds of millions of dollars better off if LeBron stays put.”

The state of Ohio spends a lot of money on incentives to get entrepreneurs to start businesses in Ohio. But, paradoxically, we have tax policies that encourage the successful ones to move elsewhere.

LeBron James is perhaps the most famous Ohio entrepreneur to relocate to a lower tax state in recent years. But many less well known ones have also moved.

Perhaps the departure of King James Inc. will lead the governor and state legislators – some of whom undoubtedly are fans of both basketball and economic impact studies – to recognize that having higher taxes than many other states is leading to the loss of Ohio entrepreneurs we should be working hard to keep.