America is supposed to be a place where independent inventors and small firms play a key role in the creation of new technology. As New York University economics Professor Will Baumol wrote in the 2008 Small Business Economy, “small enterprises have made a critical contribution to innovation accomplishments. Without breakthroughs such as the airplane, FM radio, and the personal computer, all introduced by small firms, life in the industrialized economies would be very different today.”

Moreover, small firms are believed to be particularly productive inventors. According to the U.S. Small Business Administration (SBA), small companies “produce 13 times more patents per employee than large patenting firms.” And small firm patents tend to be more technically important. As the SBA explains, “these patents are twice as likely as large firm patents to be among the one percent most cited.”

The important role that small businesses have played in the invention of new technology makes me worry that recently the United States has shifted away from its historical path. U.S. Patent and Trademark Office (USPTO) statistics show that small entities are accounting for a decreasing share of U.S. patents. 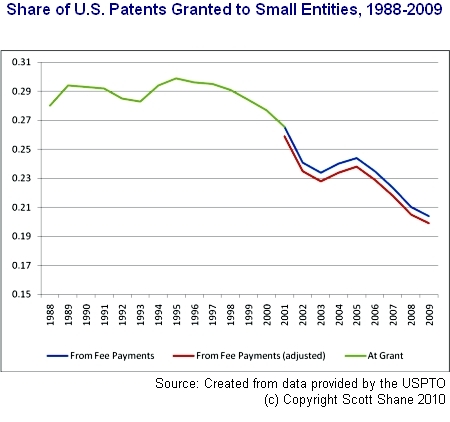 Many U.S. patents are now granted to foreign inventors. Does the decline in the small entity share of patents come from big foreign companies taking an increasing slice?

The USPTO data doesn’t indicate that. As figure below shows, the share of patents granted to U.S. residents that go to small entities has also declined, from 35 percent in 2001 to 28 percent in 2009. 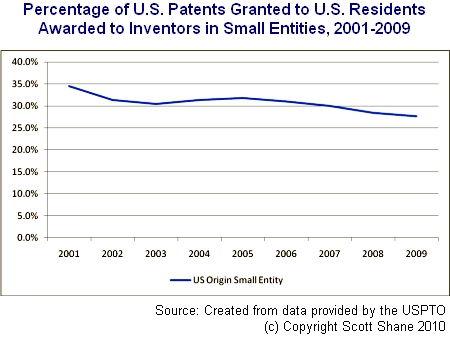 In fact, the trends are probably worse than these figures show. Because the USPTO classifies universities and other non-profits as small entities (as long as their patents have not been assigned to a large entity), the small entity numbers overstate the share of patents being assigned to small firms.

If the authors who have argued that small businesses play an important role in technological innovation are right, then the decline in the share of patents being awarded to small entities over the past decade and a half should be a cause for policy makers’ concern.