Suppose President Obama is considering different alternatives to stimulate job creation. One focuses on the largest businesses, the other on medium-sized firms, and the third on the smallest companies. Being a smart guy, he wants to see the data before he makes a decision. So he asks his advisors, “What share of jobs does small business create?”

Bizarre as it might sound, the answer he will get depends on which government agency’s numbers his advisors look at. In a recent working paper, Brian Headd, a Small Business Administration economist, reported the portion of net new employment – jobs created minus jobs destroyed – in different sized firms since 1993. Drawing on statistics from the two main government agencies responsible for calculating these figures, the Bureau of Labor Statistics (BLS) and the Census, he created simple pie charts to show the portion of net new employment produced by businesses of less than 20 workers, 20 to 499 workers, and more than 500 workers.

In the figure below, I have created similar charts, adjusting the time period to 1993-2006 so that the same years are examined with both the Census and BLS data. 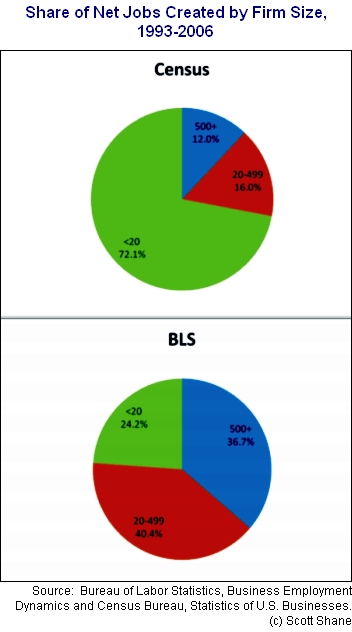 The numbers are astonishingly different. The BLS data says that the smallest businesses are responsible for the smallest portion of net job generation, producing only 24.2 percent of net new employment from 1993 to 2006. The largest chunk of job formation came from medium-sized businesses, which produced 40.4 percent of the net new positions. Big firms were responsible for 36.7 percent.

Census’s numbers say that the smallest businesses produced the largest chunk of employment, generating 72.1 percent of net new positions. The smallest portion of net job generation came from big firms, which generated only 12 percent of it, although medium-sized firms were only a little better, accounting for 16 percent.

Brian Headd does a good job explaining why the two agencies’ numbers are so different. He says the Census “uses the start period in classifying firm size for each individual firm and measures the difference in employment for each firm based on their end period employment minus their start period employment. [BLS] uses a firm’s start period size and classifies all employment changes at that size class until the firm changes into another size classification.” Headd correctly points out that the small number of companies that move from one size category to another fundamentally alters the net employment numbers for small companies.

Unfortunately, the fact that we can come up with a mathematical explanation for the differences is beside the point. Two government agencies come up with wildly different numbers, depending on which (perfectly reasonable) approach to analysis they take. To me, this means that we have real problems with our efforts to understand small business job creation.

I suppose I should look at the bright side. At least on this issue, the politicians won’t have to distort the statistics to make their points. All they need to do is figure out which highly reputable group of government analysts uses the methodology that gives them the answer they want to hear, and talk only to them.