Perhaps that was once true, but it’s not anymore.

In a speech introducing the President’s new National Advisory Council on Innovation and Entrepreneurship, Secretary of Commerce Gary Locke said, “America’s innovation engine is not as efficient or as effective as it needs to be, and we are not creating as many jobs as we should.”

Recent data suggests that Secretary Locke is right. A study by the Information Technology and Innovation Foundation looked at the progress at innovation that 40 countries made over the past decade. The U.S. came in dead last. That is, whether they were ahead or behind us at innovation in 1999, the 39 other countries examined gained ground on us over the past ten years.

Fortunately, we were doing pretty well at innovation in 1999 so we still came in sixth in 2009. But the trend doesn’t bode well for the future.

Other studies also show our less-than-stellar innovation performance. A recent report by the Organization for Economic Development and Cooperation (OECD) looked at the per capita rate at which inventors in 38 nations filed for triadic patents – patents for the same invention filed in the United States, Japan, and Europe. The data shows that, in this event, we’re out of medal contention in eighth place, well behind countries like Switzerland, Japan, and Sweden.

Of course, while American business overall may be lagging in its innovativeness, our entrepreneurs might still be top of the heap at innovation.

The OECD data suggest not.

Looking at two measures – the share of companies less than five years old that file patents and the share of patents that went to companies under the age of five – across 13 industrialized countries, the United States came in third, after Norway and Denmark. While a respectable showing, it’s not where we need or want to be. 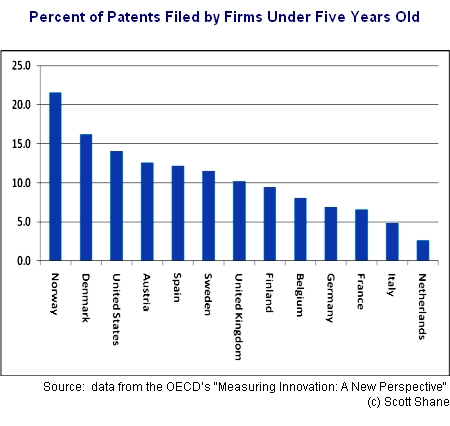 Moreover, the numbers have been getting worse, not better. As I explained in an earlier post, data from the U.S. Patent and Trademark Office shows that in 2001, 25.9 percent of U.S. patents went to small entities. By 2009, that number had dropped to 19.9 percent.

We aren’t investing in high tech start-ups the way we used to. In an earlier post, I pointed out the unhealthy trends in the U.S. venture capital industry. The number of deals made, capital invested, and exits are all down from their levels back in the mid 1990s, before the Internet bubble hit.

Venture capital accounts for less of U.S. economic activity than that of many other countries. As the figure below shows, in 2008, the U.S. invested a smaller share of its gross domestic product in venture capital than ten OECD countries, and a larger share than only twelve of them. 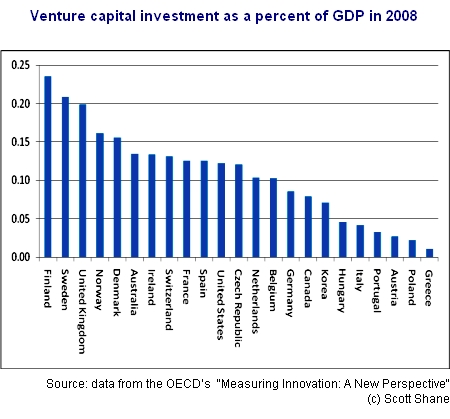 While the U.S. still remains a solid player at high tech entrepreneurship, the trend over the past decade makes it difficult to say that “no country has mastered innovation and entrepreneurship as effectively as America.”