Let’s face it, social media is more than just the buzz word of the moment.  Alexa.com, the traffic ranking web information company, highlights the top ten most used websites. 50% of them are social media sites with Facebook landing in the number two spot (Google is number one).  Others on the list include YouTube at number three and Twitter at number 10.

By nature humans are social offline.  That doesn’t seem to change once we get in front of a computer.  But what does it have to do with business?   Some still see social media as a toy for teenagers and others have discovered that it’s not but are uncertain as to how to engage.  Network Solutions highlights something interesting about business and social media in the fourth wave of their Small Business Success Index (SBSI) study.

In June of this year, they worked with the Center for Excellence in Service at the University of Maryland’s Robert H. Smith School of Business to survey 500 small business owners by telephone.

According to the Small Business Success Index (download PDF report here), 20% of businesses actively use social media.  The top 3 social sites they use are Facebook (82%), LinkedIn (38%) and Twitter (30%).

Of those who use or may use social media, it’s roughly a breakeven proposition for at least half of them today.  But they have positive expectations for the near future, when 57% expect to profit from their social media activities within the next 12 months, as this chart shows: 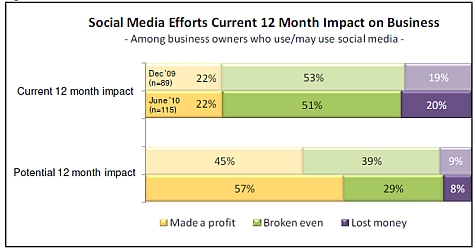 If you take the Success Index as any indication, there hasn’t been a big payoff from using social media — yet.  But small businesses are not put off, and expect social media to play a role in driving profits in their businesses.