As I was working with a client to develop her social media strategy, she mentioned that she has realized that relationship building is really a business practice. This is someone who was under the misconception that networking is about gathering business cards. She didn’t realize that networking is really about building and maintaining relationships with other business people. As we got her more involved with LinkedIn, she started reconnecting with people she had lost contact with over time–and she was really enjoying the rediscovery. She started to understand the real value that relationships play in business. 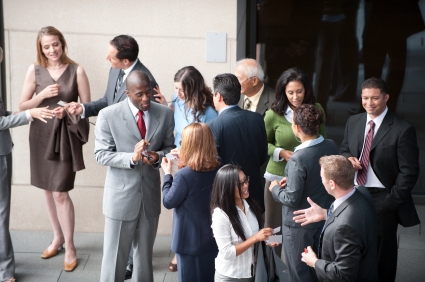 A few days later, I saw a friend of mine, Jeff Nischwitz of Think Again, who said that “networking” was a misnomer. “It’s about relationships,” he said. He was really talking about how people have the wrong idea about networking and this wrong idea is making business development difficult for them.

That got me thinking about what works and what doesn’t when it comes to networking and building relationships.

There still seem to be some misunderstandings about networking. Based on some of the behavior I’ve seen, it appears that many people are still missing the whole idea of relationship building. It doesn’t matter whether it is social networking or in-person networking. In the business practice of building relationships, there are three deadly sins to avoid:

1. Pitching early
2. Signing someone up without permission
3. Assuming closeness

This is when you meet someone at a networking event, exchange cards, and decide that the card exchange gives you permission to give them a sales pitch. This happens all the time. It’s one of the reasons that some people avoid networking events. They either think they are supposed to behave this way and aren’t comfortable in that role, or they dislike the people who do it and don’t want to be around them.

I submit that the same is true for “social networking.” Linking in or friending someone online does not mean you have an open invitation to sell to them. Here’s an example of a double whammy – I met a young man at a chamber event. Within a couple of days he sent me a LinkedIn request to connect. I accepted. Now I receive solicitations from him via LinkedIn.

The problem? I don’t know him, so I can’t trust him. He doesn’t know what my situation is or what my needs are. He isn’t matching a solution to a problem. He is solely focused on what he wants. If, on the other hand, he had continued the process of relationship building, he would have learned more about me and my situation. He would have waited to sell until he knew there was a need and until he had established trust. As it stands, I’m not even interested in seeing him at the next chamber function. He accomplished the exact opposite of what he wanted–all because he pitched too early.

2. Signing someone up without permission: As far as I’m concerned, this is one of the deadliest networking sins. It is presumptuous and rude. I believe that when you do this you are telegraphing that you are more interested in building your list than in building relationships. How do you know the person needs what you have to offer? How do you know they want to read what you have to say? Where did you get permission to enter their e-mail inbox on a consistent basis? Remember, the simple exchange of business cards is not a license to behave in any way you choose.

The solution is so very simple. When you meet someone and engage in a conversation, you will learn things about them. If you discover that they have an interest in or need for the information you provide, ask them if they’d like to be added to your e-mail list and tell them why you think it would be a good idea for them. If they say “yes,” jot a note to yourself on their card. If they say “no,” don’t do it!

Did you notice the steps? They go in order. To take them out of order is to ask for trouble.

3. Assuming closeness: The story I told above about the young man I met at the chamber event also falls under this category. He assumed that we were closer than we were. He assumed that we had a relationship because of our chamber and online connections.

Think about the relationships you have with your friends, significant other, co-workers. Did they happen instantly? At “hello”? They didn’t, did they? They had to be built and nurtured; they had to grow over time.

This is not to say they you didn’t feel some sort of connection with some of these people. That sense of connection is what propels you to want to get to know them better. However, until you know someone better, you really don’t know enough to explore the possibility of conducting business with each other.

Nothing sends people running from you quicker than assuming closeness that doesn’t exist. Not only does it send people running, but they will tell others what you did. If you want to destroy your reputation quickly, then by all means, assume closeness. If, on the other hand, you want to grow your business, don’t make assumptions. Rather, grow those relationships first.

Diane Helbig is a Professional Coach and the president of Seize This Day. Diane is a Contributing Editor on COSE Mindspring, a resource website for small business owners, as well as a member of the Top Sales World Experts Panel at Top Sales World.
45 Reactions
Subscribe
Follow @smallbiztrends
RSS LinkedIn Pinterest iTunes