When it comes to energy-saving opportunities for businesses, lighting frequently tops the list. Every business needs lights, and energy-efficient varieties – such as compact fluorescents (CFLs) and T8 fluorescent tube lights – use 40 percent to 75 percent less energy than their conventional (dare I say “old-fashioned”?) counterparts. Replacing older lights with more efficient alternatives often pays back in less than two years – far quicker than other, more costly energy upgrades.

But there’s another big lighting opportunity on the horizon: Light-emitting diodes, or LEDs.  They are getting more affordable, too. 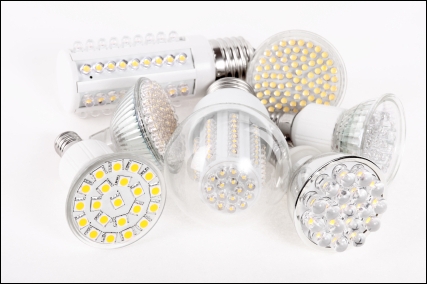 Many businesses already use LED-lit exit signs and “Open” signs because they are cost-effective alternatives to signs with less efficient bulbs. And many large corporations, from Wal-Mart to Starbucks, are starting to invest in LEDs for many different types of fixtures.

But most small businesses don’t currently use LEDs in their light fixtures because of the substantial upfront cost. CFL bulbs may cost $2, while an LED light bulb can cost more than $30. However, it’s hard to overlook the energy-saving potential: LEDs use less than half the electricity of fluorescent lights and can last more than 30 years.

Consider this: One 60-watt incandescent light bulb might cost $12 in electricity a year to operate, while a CFL might cost $3 and a LED might cost $1.50. But once you factor in the upfront cost of the bulbs, it takes far longer to pay off the LED. The real savings comes in the long lifespan of LEDs. Moreover, LEDs tend to have a more pleasing, softer quality of light than fluorescents and don’t contain mercury.

The economics of LEDs is getting brighter every day, and there’s reason to start considering them. The New York Times recently reported that the price of certain LED light bulbs had fallen below $20 at Home Depot – several years before forecasters ever thought they’d get so affordable. When the price starts getting below $10 or $15, it may be time to buy.

It might be worth seeing what incentives for LEDs are available to your business.

Kelly Spors is a former small-business and entrepreneurship reporter and blogger for The Wall Street Journal who has also written for Yahoo!, Entrepreneur, NFIB's MyBusiness magazine and The New York Times. Kelly is now a freelance editor and writer based in Minneapolis and has previously managed communications for an environmental non-profit that helps businesses find ways to be greener.
5 Reactions
Subscribe
Follow @smallbiztrends
RSS LinkedIn Pinterest iTunes