What’s the Difference Between Men and Women Entrepreneurs? Apparently, Not Much

There’s been a lot of heat generated in the blogosphere lately about the shortage of women entrepreneurs in technology and what’s behind this problem—or if it truly is a problem, or if it even exists. While many experts were weighing in on the differences between male and female startup founders, one expert decided to investigate. 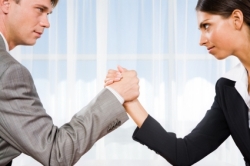 Former entrepreneur-turned-academic Vivek Wadhwa, who blogs regularly on TechCrunch, and his team analyzed the backgrounds of 652 founders of tech industry startups, as well as 549 founders of companies in other fast-growing industries. “Our research focused on successful startups—those that had made it out of the garage, had employees, and were actually generating revenue,” writes Wadhwa on TechCrunch. Here’s what they found:

The average age of a successful tech startup founder is 39; for other high-growth companies, it was 40. Overall, company founders were typically married; had two or more children; had six to 10 years of work experience.

That explodes some myths about tech startup founders in general (they’re not all college students or single twentysomething men), but Wadhwa also wanted to take a closer look at male vs. female founders.  He enlisted Joanne Cohoon of the National Council of Women in Technology (NCWIT), whose analysts assessed the data. The result? There was almost no difference between men and women company founders.

One difference: Wadhwa found that women got slightly more funding than did men from business partners. (You can read the full results in Are Successful Women Entrepreneurs Different from Men?)

Now, while Wadhwa didn’t find differences between male and female tech founders, he does emphasize that there is a real shortage of women entering technology. “The imbalance between the sexes … is increasing over time,” he writes. Among the discouraging realities: The percentage of computer science students who are female has dropped from 37 percent in 1985 to 19 percent today; just 1 percent of high-tech startups have a woman as CEO.

How can this change? Wadhwa shares some ideas on TechCrunch, but I’d love to hear yours as well.

Rieva Lesonsky is a Columnist for Small Business Trends covering employment, retail trends and women in business. She is CEO of GrowBiz Media, a media company that helps entrepreneurs start and grow their businesses. Visit her blog, SmallBizDaily, to get the scoop on business trends and free TrendCast reports.
13 Reactions
Subscribe
Follow @smallbiztrends
RSS LinkedIn Pinterest iTunes