How Much Money do Small Business Owners Make?

In the table below, I show the income and sales of the average sub chapter S Corporation in the latest year the data are available. The figure shows that the average S corp generated about $100,000 income on about $1.5 million in sales in the last year before the Great Recession.

While the income of the average S corp was less than seven percent of its sales, there was wide variation across major industry sectors on this measure. Income only equaled about two percent of sales for sub chapter S corporations in retail, but almost 55 percent in management of companies, and almost 29 percent in mining. Similarly, wide industry differences can be seen in the average income of these businesses, ranging from only a little more than $28,000 in other services to $692,000 in management of companies. In fact, in four industry sectors – utilities, manufacturing, mining and management of companies – the average Sub Chapter S Corporation is making its owner rich by President Obama’s standards, generating more than $250,000 in income in 2007. 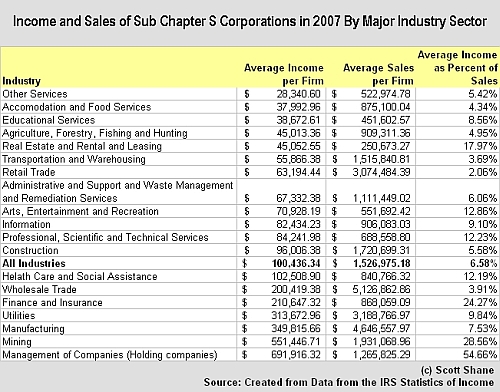 As one would expect, the numbers are much lower than for the average sub chapter S corporation. In 2008, the average nonfarm sole proprietorship had revenues of only $58,256 and net income of only $11,696.

Click here for an Excel table that shows average income, sales, and income as a percentage of sales for sole proprietorships in 135 industries in 2008.

Scott Shane is A. Malachi Mixon III, Professor of Entrepreneurial Studies at Case Western Reserve University. He is the author of nine books, including Fool's Gold: The Truth Behind Angel Investing in America ; Illusions of Entrepreneurship: and The Costly Myths that Entrepreneurs, Investors, and Policy Makers Live By.
25 Reactions
Subscribe
Follow @smallbiztrends
RSS LinkedIn Pinterest iTunes