There was a time when online coupons were presumed dead. However, in 2011 they’re cool again, having established themselves as a trusted friend of local retailers and an ally in helping them attract customers online and in store. In 2010, coupons were named one of the five can’t miss mobile marketing trends and their popularity was further enhanced by both social coupon sites like Groupon. If you’re not familiar with Groupon, the site offers city-specific daily deals and last month received a $6 billion marriage proposal from Google. Groupon, however, declined–so Google did what any jilted suitor would do – they found an alternative by creating their own social couponing site. And here we are. 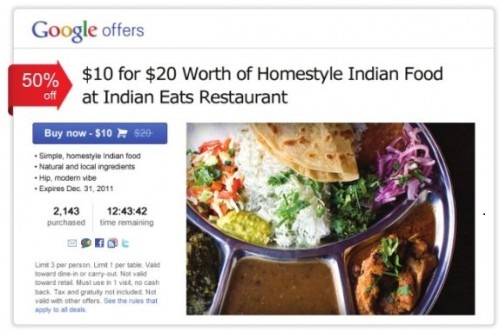 Mashable broke the news last week that the Google was quietly in the process of testing Google Offers, a “new product to help potential customers and clientele find great deals in their area through a daily e-mail,” according to the Offers fact sheet. Mashable was kind enough to put the entire Offers Fact Sheet up on Scribd, so you can take a look at it for yourself.

According to the document, Google Offers will work very similarly to how Groupon and LivingSocial (another social coupon site) work, which, I’m sure, is purely coincidental. The process is this:

Pretty smooth system, right? Exactly, and it’s why Groupon has quickly become a social media darling since its initial launch. And with Google getting in on the action and trying to compete, things may get even sweeter for local retailers.

If you’re a small business owner and you haven’t read up on these social coupon sites, it’s worth your time to do so. Whether it’s Google Offers (which isn’t live yet), Groupon, Social Living or one of the other clones, they present a great marketing opportunity for local businesses.

First, there’s no risk involved. Because you only owe the middleman a portion of your profit, if no one accepts the offer (and there isn’t a profit), you don’t have to pay. There is no fee for simply creating an offer. Not only does that mean there’s no startup cost involved, it also means that these ad writers are going to be doing their best to craft a great offer for you–because they don’t make money unless you do. Groupon advertises that 97 percent of businesses that experiment with the service come back. And that’s not surprising. You’re putting a specially crafted message in front of a targeted audience.  It’s going to convert. That’s Marketing 101.

With Google getting into the game, the scenario becomes even more inviting since SMBs will get to take advantage of Google’s ad network and brand for free. You give Google Offers something to market and they’ll do it for you and present it to local subscribers, their entire ad network, and viewers of the Google Offers site.

It’s another step by Google to dominate the contentious local search market. They may not have had much success with their Google Coupons product, but they’re coming back into a different market with a savvier coupon-using audience. As Greg Sterling notes over at Search Engine Land notes, if Google’s smart, they’ll take a much smaller commission rate than the 50 percent fee that Groupon takes in order to establish market dominance. The trick here will be to get people to try out the new service. Give them an incentive to do so and you’ll get them for the long haul.

Of course, Google Offers is currently in a secret testing mode and isn’t available yet for small business owners to experiment with. However, sites like Groupon already exist. Now may be a good time to get some experience with these types of sites.

Have you experimented with Groupon or any of the social coupon sites? If so, what’s been your experience?