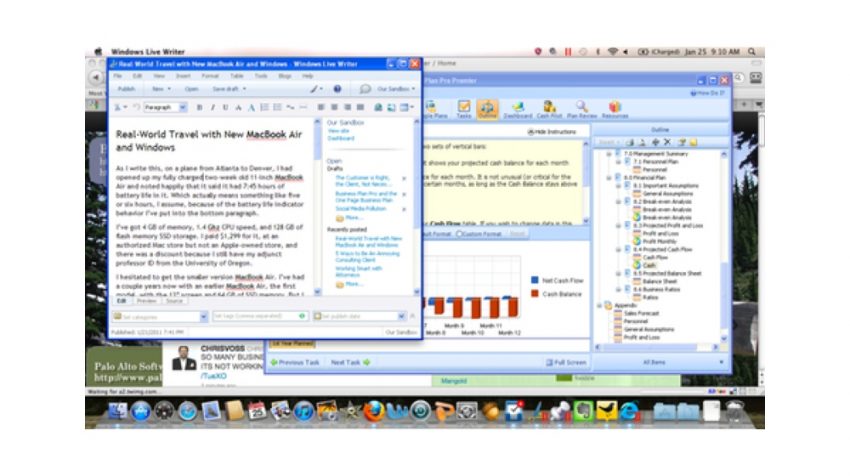 As I write this, on a plane from Atlanta to Denver, I had opened up my fully charged two-week old 11-inch MacBook Air. I noted happily that it said it had 7:45 hours of battery life in it. That actually means something like five or six hours, I assume, because of the battery life indicator behavior. See the bottom paragraph.

I hesitated to get the smaller version MacBook Air. I’ve had a couple years now with an earlier MacBook Air, the first model, with the 13” screen and 64 GB of SSD memory. But I liked the various versions of the Sony Vaio very small laptops for years, and I guess I’ve gotten used to the advantages of smaller and lighter.

I’m particularly enjoying this smaller screen right now because I’m on the plane, and it sits on my lap comfortably despite the lowered seat back of the guy in front of me. With my old one, with the larger screen, I’d have had to assume that scrunched-up pose you see, laptop not fully open, arms bent, to manage to type in a small space. And the smaller screen also has the advantage of smaller to stow in a briefcase, and lighter. This one is only a coupe of pounds. So maybe I’m just rationalizing getting the slightly cheaper one – I rationalize as well as most people – but I’m glad for my choice right now.

While I like my Macs – this one, and my iMac at home – I’m not a quasi-religious Mac fanatic. I use Windows 7 on my office desktop and I have no problems with it, so I’m not particularly anxious to switch to all Mac or, for that matter, all Windows.  Parallels gives me a Windows option on both my Macs. I upgraded to the new Parallels version 6, and that works fine for me.

Most of my work is on the cloud or using bilingual Mac-Windows software. But I have two Windows applications that I cannot do without: Windows Live Writer, for blogging; and Business Plan Pro, for business planning (disclosure and bias alert: I’m the main author of that product, and my company publishes it).

The cross-platform trick, adding Windows using Parallels and running my applications in coherence mode, works fine for me. Coherence mode means that my Windows Apps operate in Mac windows, peacefully coexisting with my Mac apps. And the 4 GB memory, which is double what I had in my previous MacBook Air, is enough. It feels smooth and fast.

The 1.4 Ghz CPU speed on this one is actually less than the 1.8Ghz speed of the one it replaced. I don’t notice the difference. I assume that’s because of the doubled memory.

I’ve learned with the MacBook to manage the settings to preserve the battery. I use my brightness keys to take it down to about 3 of 10. This plane doesn’t offer wireless. So I turn off my wireless and bluetooth reception, and I close the applications I won’t be using.

I use a laptop as an accessory, not my main computer, so 128 GB of storage is fine for me. The one I just replaced I’d had for two years and still had half of its 64 GB storage available. I’m tempted to use it as my main iTunes hub for my iPhone and iPad, because it’s got double the storage; but I use a lot of hard disk space for movies and such, so I think not. My experience is that all computers get really slow when the hard disk space gets more than three quarters full.

For the record, I’m a happy iPad owner. But I have to say that the iPad doesn’t substitute for a laptop computer. Instead of reducing my travel weight, the iPad effectively increases it; I need the computer to work, and I love the iPad for its entertainment value. Occasionally it doubles as a laptop, for a meeting or a half-day visit somewhere. On real trips I need both, however.

And as I finish this post, I’ve been working for about 30 or 40 minutes. And my battery life is showing barely five hours now, but still vacillating between that and higher reading. It was showing 11 hours a minute ago, and now it’s back to five. I haven’t opened any new apps, and I haven’t changed the brightness. So I’m guessing it’s not the most reliable indicator. Still, the flight from Atlanta to Denver is about three hours. So if it really has five hours left, I’m okay.

Tim Berry is Founder and Chairman of Palo Alto Software, Founder of Bplans, Co-Founder of Borland International, Stanford MBA, and co-founder of Have Presence. He is the author of several books and thousands of articles on business planning, small business, social media and startup business.
3 Reactions
Subscribe
Follow @smallbiztrends
RSS LinkedIn Pinterest iTunes