Almost everyone agrees that small business borrowing plummeted during the Great Recession. The authoritative source on the topic, the Federal Financial Institutions Examination Council (FFIEC), reported that the dollar value of bank loans to small businesses declined 47 percent from 2007 to 2009.

But the economic recovery began in June 2009. In theory, small business borrowing should have come back since then. Has it? Unfortunately, the FFIEC hasn’t yet released the hard numbers on small business bank loans, so we have to look at other sources to divine the trends.

Different sources tell conflicting stories. Consider the question: Are small businesses returning to credit markets? A survey conducted in October of last year by the Gallup Organization found the answer to be “no”. The share of small businesses seeking credit declined from 55 percent in 2009 to 48 percent in 2010.

However, the Federal Reserve’s survey of senior bank loan officers indicates that small business’s demand for loans increased over the past year, with more loan officers reporting rising demand than falling demand in January 2011.

We also have mixed signals about whether small businesses are getting the capital that they need. The Gallup survey revealed that small companies seeking credit were more likely to get it in 2010 than in 2009 and that they received more of what they asked for in 2010. However, the National Federation of Independent Business’s (NFIB) monthly survey of its members indicates that the share of small businesses whose borrowing needs were met was 2 percentage points lower in January 2011 than in June 2009.

Banks and small business owners also have different perceptions of how hard or easy it is to borrow these days. After a tremendous tightening of loan standards during the recession, the share of senior bank loan officers reporting a loosening of small business loan standards has increased over the last year. 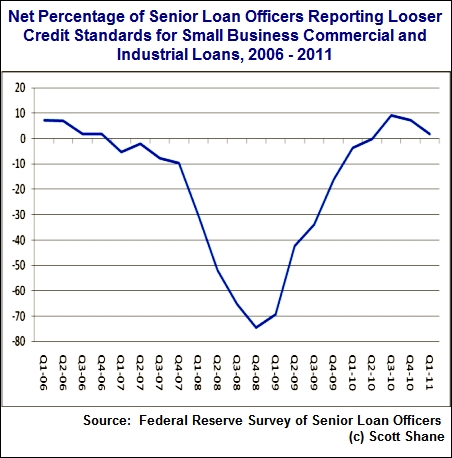 In short, the conflicting stories make it difficult to tell if small business access to credit has improved in the past year.