Who Do Your Customers Trust: Friends or Experts?

It’s all a matter of trust. Whether we’re talking social media or business, it’s about building relationships with potential customers so they trust us long enough to stick around and hear what we have to say. Because if they don’t, all that great content, interacting and marketing won’t help. Without trust, you have nothing.

With trust so important, everyone wants to know who people trust more. Who is it you want singing your company’s praises to make an impression? Is it a potential customer’s next-door neighbor, an authority figure, a celebrity? Recently, I stumbled upon on an eMarketer post that commented on two studies that seemed to offer conflicting answers to that question. I thought perhaps I’d dig into their numbers a bit to find the real story. 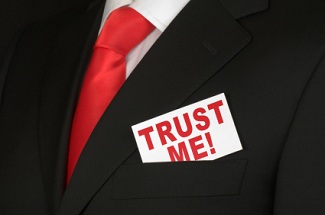 The first study mentioned by eMarketer was GlobalWebIndex’s 2011 report, which claims to have the most detailed set of data on your online audience ever. (So, take that, everyone else.)  According to their numbers, since 2009 users worldwide have reported:

Not bad, but probably what you’d expect given the date ranges, right? That study also showed that trust in traditional media like newspapers, television and radio has barely moved over the same time period. GlobalWebIndex states these numbers show the important synergy that exists between professional content and who it is that’s sharing that content.

While that’s true, I don’t think it paints a very clear picture of who your prime distributor is. It makes sense to see social media sites showing the highest “increases,” since they had the most to gain over the past couple of years. That doesn’t necessarily mean that’s where your audience is or that trust is growing for “people like us.”

Edelman’s data provides an entirely different look at consumer trust than the one mentioned above. According to their research, it’s not “people like us” that we look toward for influence, but people smarter than us. Edelman’s data lists the most trustworthy folks as:

Why are Edelmen’s numbers so skewed toward academic professionals? Well, because of the group polled. The respondents for the Trust Barometer study were not your average sampling of Internet users. Instead, they were college-educated consumers ages 25 to 64 , in the top 25 percent of household income relative to age group, who regularly follow business news and public policy. “People like them” are academic professors or field experts. Therefore it makes sense that those are the opinions they would seek out and trust.

So what are the takeaways for small business owners? Be wary of studies and do your own research to understand who your particular audience takes its cues from.

As a small business owner, you need to observe your own audience. Who are they conversing with? Who are they retweeting? What blogs/information sources do they read? Where do they get the information that they share? Do they ask Twitter for answers or do they ask Twitter for sources? These are their trust circles and how you’ll want to appeal to them.

Trust is essential to your business. That means both gaining trust yourself and understanding who your core audience trusts to help you market to them. You don’t need a fancy survey to tell you who that is. You just have to do your homework.